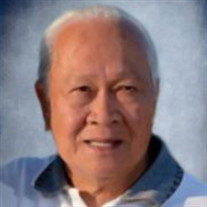 Neftali A. Martinez, M.D., age 81, passed peacefully after a long struggle with lung and heart disease on June 19, 2020 at his residence in Lewes, DE, with his wife, Carolyn, by his side. Nef, as he was known to family and friends, was born in Mandaluyong, Philippines on February 19, 1939, son of the late Benjamin S. and Josefina A. (Ayeras) Martinez. He grew up poor but determined and was able to finish up medical school with the help of sacrifices made by his blacksmith father. Nef graduated from Plaridel High School (Mandaluyong - Rizal, Philippines) and received his medical degree from the University of Santo Tomas in Manila, Philippines. With the help of a benefactor in 1967, he was able to afford the opportunity to immigrate to the United States. He arrived with $300 in his pocket and the promise of an internship at Northeastern Hospital in Philadelphia, PA. Afterwards, he did his general practice residency at Maryview Hospital in Portsmouth, VA where, in 1968, he met the love of his life, Carolyn, who was a hospital volunteer at the time. Nef did his pediatric residency at the Medical Center of Delaware in Wilmington, DE, and liked Delaware so much he never left. In 1972, with Carolyn at his side, Nef created a successful private pediatric practice in New Castle County. He found so much joy in treating children and had many patients that were of the third generation. Nef loved interacting with his patients and purposely would not overschedule appointments so he had ample time with each and every one of them. Nef was a member of the Medical Society of Delaware, the Academy of Pediatrics, and the American Medical Association. Over the years, Nef was a parishioner at St. John the Beloved (Wilmington, DE), St. Mary of the Assumption (Hockessin, DE) and St. Jude the Apostle Catholic Church (Lewes, DE). Nef and Carolyn were married for nearly 51 years. Together they proudly built the family home in Hockessin, DE where they resided for nearly 30 years. Carolyn was Nef’s rock. She was his right hand throughout life and helped bridge the cultural divide from traditional Philippine heritage to American culture. With Carolyn at his side, Nef was able to fully enjoy the practice of pediatrics while she handled all the back-office paperwork, and everything related to running the business. They made a great team in everything they did. Nef adored his 4 grandchildren who all called him “Grandpa.” He loved history and enjoyed quizzing them on all sorts of trivia. He was a terrific violin player and loved nothing more than playing the ukulele, harmonica or just banging pots, making noise, and dancing with them. There was nothing better than Dr. Grandpa taking care of all their belly aches and boo-boos. Dad believed education was the key to success in life and something that could never be taken away from you. He sacrificed a lot for his education and was determined to provide the same for his children, which he did. Nothing made him prouder than being able to provide more opportunities for his children than he had as a child and he instilled that same desire in Jen and Jeff to provide his grandchildren even more opportunities. Nef was an avid reader of the Wall Street Journal and any DIY books he could get his hands on. Nef loved gardening, a craft he learned from his father who grew orchids in the Philippines. He enjoyed camping and fishing, which he learned in the Boy Scouts and later shared with his wife and children. Nef especially loved to pier fish on the Outer Banks of North Carolina. After retirement he traveled around the United States, Europe and Asia and loved exploring the world with his family. Doctor Nef was a simple man who found value in everything because he came from nothing. Dad was always finding unusual ways to reuse things, so he saved all sorts of things. There wasn’t anything he couldn’t fix without superglue, duct tape or twine. It pained him to waste food because growing up they had very little. His favorite food without a doubt was anything Carolyn cooked (though he seldom would admit it). Carolyn taught herself how to make lots of Philippine dishes for Nef and spent a lifetime perfecting them. You always knew where you stood with Dad. He told it like it was and spoke his mind always. He knew so much about so many things; Dad won nearly every argument or wore you down trying. Much is expected of the oldest males in Filipino families. His was no different, as he was called to help support his family back home financially and sponsored several family members for United States citizenship. Nef was a generous man and never said no to his family in need. In addition to his parents, Nef was preceded in death by his sisters: Adoracion Roque and Visitiacion Sabile. Nef is survived by his loving wife of 51 years, Carolyn (Collins) Martinez of Lewes, DE; his daughter, Jennifer (Martinez) Larmore of Wilmington, DE and her husband Matt; his son, Jeffrey Collins Martinez of Inez, TX and his wife Cara; his four grandchildren: Madison Larmore, Bailey Larmore, Dane Martinez and Dominic Martinez. He is also survived by his siblings: Herminia Martinez of Wilmington, DE, Zenaida Solis of Manila, Philippines, Bienvenido Martinez of Manila, Philippines, Josefina Martinez of Wilmington, DE, and Levy Martinez of Wilmington, DE; and his many nieces and nephews all over the world. All services will be held privately on June 25, 2020. Please sign the online guestbook located on the tribute page.

Neftali A. Martinez, M.D., age 81, passed peacefully after a long struggle with lung and heart disease on June 19, 2020 at his residence in Lewes, DE, with his wife, Carolyn, by his side. Nef, as he was known to family and friends, was born... View Obituary & Service Information

The family of Neftali A. Martinez M.D. created this Life Tributes page to make it easy to share your memories.

Send flowers to the Martinez family.