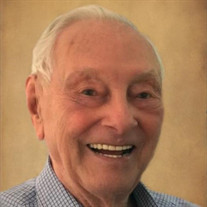 LONG NECK, DE - Miles Lee Riggin, 94 of Long Neck, DE, died January 31, 2021 at his home surrounded by his loving family. Born in Crisfield, MD on Aug. 26, 1926, he was the son of the late Ercil Lee Riggin and the late Thelma Miles Riggin. The Riggin family has deep roots in the Crisfield area dating back to the late 1600's. As a child, Miles attended the 3-room Bedsworth Elementary School in Crisfield which had a potbelly stove and outhouse. As a teen, he moved with his parents to NJ where he lived much of his adult life. Following graduation from Plainfield High School in 1944, he proudly served in the Navy during World War II on the SS Antigua in the Pacific. After the war, Miles graduated from Trenton State Teachers College (now the College of New Jersey) in 1950 with a bachelor's degree in education. He married Holly Parizot in 1951 at St. John's Lutheran Church in Bloomfield, NJ. Miles was a skilled instructor in accounting and bookkeeping and rose to the head of the Roselle Park HS business department. He also earned a master's degree in education from Rutgers University. Later, he accepted an assignment as the Chair of the business department at Bridgewater-Raritan East High School until his retirement in 1981. Miles also taught night school at Middlesex County Community College, Trenton State Teachers College, and a local prison and worked at various corporations such as Ciba-Geigy during the summers. Miles was active in the NJ Business Teachers Association, ultimately serving as its President. For much of his career, Miles lived in North Plainfield, NJ. He attended Wesley Methodist Church in South Plainfield, NJ. Miles and Holly Riggin, his devoted wife of 69 years, retired back to his family home in Crisfield, MD in 1981. They took long walks on the Ocean City boardwalk. Miles was a member of Immanuel United Methodist Church in Crisfield where he was active in the choir. He loved music, often playing the organ at home and occasionally at church. When visiting, you could always hear music playing in the background, from classical, to Big Band, to show tunes. Miles read constantly, mostly mysteries and thrillers, and was a dog lover, especially Blondie, the family Labrador. He was also an officer in the local Rotary Club. He was a terrific dad and really blossomed as a doting grandfather, affectionately known as Pepa. He is survived by his wife Holly of Long Neck, DE; his daughter Janice Lee Smith and her husband Kent Smith of Long Neck, DE; his son, Glenn Miles Riggin and his wife Carol of Southern Shores, NC; grandchildren Lynsey Bieringer and her husband Matt, Jessica Riggin and her husband Walker Newell, Tyler Smith and his wife Stephanie, and Benjamin Riggin and his wife Elise, along with 5 great-grandchildren (Faith Bieringer, Eloise Newell, Addison Bieringer, Charlotte Smith, and Owen Riggin) and counting! Miles is also related to many Eastern Shore families including Dryden, Horsey, Mrohs, Ward, Davis, and Miles. A private service for the family will be held at the Delaware Veterans Memorial Cemetery in Millsboro, DE. In lieu of flowers, memorial donations are requested to be sent to The Joseph House ( or The Joseph House, PO Box 1755, Salisbury, MD 21802) or the Crisfield Fire Department (PO Box 591, Crisfield, MD 21817).

LONG NECK, DE - Miles Lee Riggin, 94 of Long Neck, DE, died January 31, 2021 at his home surrounded by his loving family. Born in Crisfield, MD on Aug. 26, 1926, he was the son of the late Ercil Lee Riggin and the late Thelma Miles Riggin.... View Obituary & Service Information

The family of Miles Lee Riggin created this Life Tributes page to make it easy to share your memories.

Send flowers to the Riggin family.