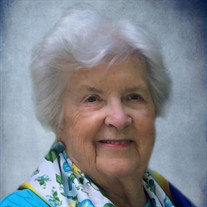 Midge Reed Beloved Family Matriarch Mildred “Midge” Ashe Reed, 89, long-time Rehoboth Beach resident and beloved family matriarch passed peacefully in her home on April 24, 2020. Throughout her courageous seven-month battle with cancer (pleural mesothelioma), and as she drew her last breath, she was surrounded by the love of her family, friends and caregivers. Born Alice Mildred Ashe on April 27, 1930 in Greenville, Pennsylvania, she was the youngest of the four children of the late Alice Mildred and Paul Milton Ashe. She graduated from Penn High School and attended Thiel College as a mathematics major before working briefly as a secretary on the Marshall Plan in Washington DC. Midge married Paul R. Reed, Jr in 1951. After Paul returned from Korea, they lived in Alexandria, VA while he attended law school. In 1955, they moved their family to Rehoboth, where Paul’s family had owned a summer home since the 1930’s. Midge was a stay-at-home mom. Her five children were her life’s work, which she performed as a single parent after her divorce in 1970. She dabbled briefly in real estate sales, always had a keen interest in politics and was an active participant at the local level. Midge served on Rehoboth’s Board of Adjustment and remained engaged in town business, even in the last years of her life. She was a devoted member of Westminster Presbyterian Church since 1956 and served as a Deacon and as an Elder. She cherished her church family and the faith, friendships and support they shared. Midge was an avid bridge player and enjoyed travel, the beach, the boardwalk, friends and family. She skied the Matterhorn, cruised seven seas, and walked many beaches, but, for the last sixty-five years, Rehoboth Beach was her much loved home. Mildred was preceded in death by her parents, and her siblings: Edwin Ashe (Mary), Janet Hogg (Jim), and Paul Ashe (Joanne and Pearl); her dear friend George; and her long-term partner Ray Masten. Midge is survived by her five children, all of whom live locally: Robert Marshal Reed (Debbie), James Calvin Reed, Ann Revere Reed (Carolyn Ivins), Amy Jane Reed Parker (Preston), Joseph Paul Reed (Dr. Maria Childers Reed); five grandchildren: Ashlee Hidell (Tim), Alexandra Baker (Dan), Paige, Brent and Hope Reed; two step-grandchildren: Henry and Max Childers; four great grandchildren: Brock, Marshal and Margot Hidell, and Blake Baker; many nieces and nephews; and her loving caregivers including Laura Brown, Lynn Mays and especially Tyra Clough and Julia Tingle who sheltered in place with her for the last month. A celebration of life will be held at a later date. In lieu of flowers, donations can be made in Midge’s memory to Westminster Presbyterian Church, 301 King Charles Ave., Rehoboth Beach, DE 19971 Due to the ongoing Covid-19 pandemic, interment will be private. Please share a memory of Midge at tab below.

The family of Mildred "Midge" Ashe Reed created this Life Tributes page to make it easy to share your memories.

Send flowers to the Reed family.