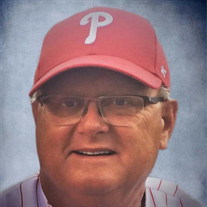 Michael D. MacCoy, 68 of Seaford, DE, passed away on Wednesday, April 14, 2021 after a long and courageous journey with Alzheimer’s disease. Michael was born in Milford, DE in 1953, to the late Alexis “Mac” Jr. and Jean MacCoy. Mike moved from Milford to Seaford in 1963 with his parents and three siblings. He met and fell in love with Holly Sterling in 1974, and they married on August 7th, 1976, proudly building their life and family together throughout their 44 years of marriage. Mike spent his career in manufacturing, working in and managing CNC machine shops at K&L Microwave, Filtronic Comtek and Lorch Microwave in Salisbury, MD. Aside from his family, Mike’s greatest loves were music, the beach and Philadelphia sports. Go Eagles & Phillies! Mike was a loving and devoted husband, father, grandfather, brother, and friend who will be deeply missed by all who knew him. In addition to his parents, he was preceded in death by his brother, Alexis Stephen MacCoy; his sisters-in-law: Laura Sterling and Sue Kerscher; and his father-in-law, George Sterling, Sr. Left to cherish his memory are his wife Holly; his daughters: Katie Purse (Curt) and Marcy Pentoney (Ben); his grandchildren: Hannah, Owen, Quinn, and Wyatt; his sister, Judith Evans; his brother, Brian MacCoy; his sister-in-law, Annie Joyce (Peter); his brother-in-law, George Sterling, Jr. (Annaliza); his mother-in-law, Anna Sterling; and his multiple nieces and nephews. A private memorial service will be held. All are invited to join the services via live streaming by visiting the following link: https://webcasts.lifetributes.com/1135500 Please contact a member of the family for more information. In lieu of flowers, the family suggests contributions in Mike's memory to the Alzheimer’s Association, Sussex County Branch Office, 108 N. Bedford Street, P.O. Box 625, Georgetown, DE 19947. Please sign the virtual guestbook located on the tribute page.

The family of Michael Dennis MacCoy created this Life Tributes page to make it easy to share your memories.

Send flowers to the MacCoy family.