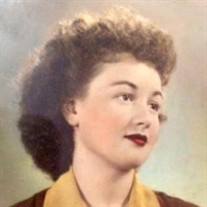 Mary Lucille “Mary Lu” Pearson, age 99 of Lewes, DE, passed away on Saturday, July 10, 2021, at The Moorings at Lewes. She was born on April 11, 1922, in Decatur, IL, daughter of the late Durward and Frances (Massengill) Dillow. Mary Lu attended Decatur High School and Metropolitan Business School in Rockford, IL. She worked as an accountant for Montgomery Ward until the birth of her daughter, following which she was a stay-at-home mother until 1953, when the family moved to the Republic of Panama Canal Zone. Mary Lu went to work as a secretary and court reporter at Fort Amador, Army HQ and then Quarry Heights, Joint Chiefs of Staff, Southern Command HQ. She traveled on assignments with officers from three services to military missions and advisory groups in Central and South America. In 1964, with her children in state-side schools, Mary Lu transferred to the Pentagon, assigned to the personal staff of General Earle G. Wheeler, Chairman, Joint Chiefs of Staff. She was assigned to his Latin American desk and later to the Chairman’s Liaison Officer to President Johnson, maintaining both the Pentagon and White House Offices. In 1969, with the change in administrations, she worked in the same assignments under Admiral Thomas H. Moorer and President Nixon. Mary Lu was also assigned to help the officer setting up a weekly de-briefing for all former Presidents: Johnson, Eisenhower, and Truman, as requested by President Johnson. With the Vietnam War escalating, Adm. Moorer was replacing all staff personnel with military. Mary Lu helped with the reorganization and in 1972, transferred to the International Security Agency, Office of the Secretary of Defense. She took early retirement in June, 1974. Mary Lu worked for the law firm of Landis, Cohen, Singman, and Rowe in Washington, DC until her husband’s retirement, when they moved to Rehoboth Beach. She worked for the YMCA of Rehoboth, then as a real estate agent for Rehoboth Realty and Plummer Realty of Lewes. Mary Lu was one of the founding members of NARFE Chapter 1690 of Rehoboth and also a founding member of The Community Foundation for Women of Delaware. Following her husband’s death, she was given a membership on the Board of Directors of “The Friends of Cape Henlopen State Park Volunteers”, in honor of her husband Eric’s years of contribution to the Nature Center and Park. Mary Lu was as lifelong golfer, joining the women at Sussex Pines Country Club when she moved to Rehoboth. She was a member of Groome United Methodist Church, Lewes. In addition to her parents, Mary Lu was preceded in death by her husbands: Lewis F. Braden and Eric A. Pearson, Jr.; her son, James L. Braden; her stepdaughter, Elizabeth Sanza; her brother, Robert Dillow; and her sister, Patricia Kramer. She is survived by her daughter: Carole Lew Foley; her stepdaughter, Eugenia A. Pearson; her sister, Betty K. Dawson; and four step-grandchildren. Mary Lu will be privately interred at Delaware Veteran’s Cemetery, Millsboro, DE. Please sign the virtual guestbook located on the tribute page.

The family of Mary Lu Pearson created this Life Tributes page to make it easy to share your memories.

Send flowers to the Pearson family.