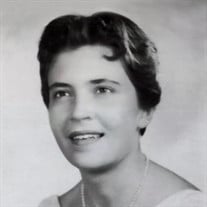 Mary Dorothy Adler (née Visceglia), 85, of Lewes, DE, passed away on October 13th, 2020 -- the day after she celebrated her 62nd wedding anniversary with her husband, Dr. Franz A. Adler. Known fondly by friends and family as Dot and by her schoolmates as “MD,” she was born on February 8th, 1935, in Jersey City and was raised in Teaneck, NJ. Both her parents, Gr. Uff. Joseph B. Visceglia and Constance Putignano Visceglia, emigrated from Bari, Italy in the early 20th Century. Dot graduated from the Marymount Academy in Tarrytown, NY, in 1953. She continued on to Marymount Manhattan College (Class of 1957), where she was determined to continue her education and training to become a speech therapist. Although this was a markedly under-served academic area in the 1950s, she remained undeterred. She pursued her degree through a program of study she designed for herself -- incorporating supporting classwork and research at Catholic University and Hunter College. At the age of 53, while raising five children, she also earned an MA in Speech Pathology. In 1957, Dot distinguished herself as one of the first speech therapists in New Jersey under the auspices of Atlantic City hospital. It was there that she met a young doctor and her future husband, Franz. They were married on October 12th, 1958, in Teaneck, NJ. Franz served multiple South Jersey hospitals as a thoracic surgeon. Together, they raised five children in Longport, NJ: Karoline S. Adler, Constance M. Adler, Joanna P. Adler, Mary Dorothy Adler-Kenney, and Karl Adler. She died content in her faith that they had all turned out precisely as she had hoped. Although she ultimately transitioned away from her career to devote herself to her family, she swiftly stepped to the fore when her husband suffered a stroke and was instrumental in the rehabilitation of his speech. In doing so, she was able to press her hard-won skills into service while caring for her family -- a fitting integration of all that she held dear. Dot was a cherished member of her community known for her keen intellect, dry wit, and a sedulous dedication to the ever-more- perfectly-turned phrase. Her inspirational stewardship of the ACHS Latin Club was “felicem operis,” and her culinary prowess was legendary. Her family trusts that her memory and prized recipes will be well-tended in the hearts and kitchens of her many friends. In addition to her children and devoted husband, she is survived by her sister, Carol Mclaughlin; her goddaughter, Geri Mullinix; her brother, Joseph Visceglia; her daughter in law, Danielle Chappell; her sons-in-law: Jonathan Auerbach, Geoffrey Stewart, and William Kenney; and her grandchildren who called her “Otsche”: Nicholas, Harry, Daniel, Tommy, Molly, Henry, and Peter. In addition to her parents, she was preceded in death by her brother, Diego Visceglia; her niece, Jean Marie McLaughlin; and her nephew, Daniel Joseph McLaughlin. A Mass will be held in her name at Holy Cross Church in Rumson, NJ. Due to travel restrictions, it is not anticipated that family can be present. In lieu of flowers, her pioneering educational pursuits may be honored through gifts made in her memory to the Speech-Language Pathology & Audiology Dept of Marymount Manhattan College, https://www.mmm.edu/giving/make-a-gift/, or via mail: Marymount Manhattan College, Office of Institutional Advancement, 221 E. 71st Street New York, NY 10022. She may also be honored through gifts to The Charity League of Atlantic County, NJ, to whom Dot devoted tireless years of service: https://www.charityleagueac.com. Her family extends their gratitude to the caring staff of The Moorings At Lewes Senior Living Community.

Mary Dorothy Adler (ne&#769;e Visceglia), 85, of Lewes, DE, passed away on October 13th, 2020 -- the day after she celebrated her 62nd wedding anniversary with her husband, Dr. Franz A. Adler. Known fondly by friends and family as Dot and by... View Obituary & Service Information

The family of Mary Dorothy Adler created this Life Tributes page to make it easy to share your memories.

Send flowers to the Adler family.