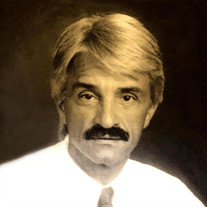 Louis Richard Nicoletti - most prominently and fondly known as Coach Nic - passed away peacefully on the morning of Thursday, April 9th, at the age of 70, after a courageous struggle with meningioma, a noncancerous tumor of the brain. He spent the last two years of his life at Harbor Healthcare & Rehabilitation Center, located in Lewes, Delaware. Lou was born in New York, New York on September 30th, 1949, son of the late Francis J. and Helen Nicoletti, whose parents were immigrants from Italy and Greece. Lou was a graduate of Conrad High School, Class of 1967, earned a Bachelor's Degree in Sociology from the University of Delaware in 1971, and completed his Master's studies in 1981. He was a devoted father as well as an exceptional teacher, coach, friend, and mentor. Working at Glasgow High School, Delcastle Technical High School, and Sussex Technical High School, he achieved over 4 decades of service and was named District Teacher of the Year in 1984 and 1995. He was also nominated for State Teacher of the Year twice during the course of his career. Throughout his life, he taught several forms of Social Studies, including Civics, Economics, Law, Environmental Education, and Advanced Placement U.S. History, and piloted his own senior seminars and curriculums, including a course titled Human Motivation. Lou’s animated personality, uproarious sense of humor, and thorough knowledge of history and story telling made his class not only educational, but also incredibly captivating. It’s no surprise that the students often said Coach Nic’s class was their favorite. In addition to his teaching achievements, Lou coached several sports including soccer in his early years and ran more than a dozen 26-mile marathons including the Boston Marathon. It was his profound love for the sport of running that made him widely known to be a successful track and cross country coach, not only coaching conference and state champions, but also lifelong athletes. He was named the State of Delaware’s Coach of the Year for Cross Country in 1987, 1988, and 2010. Lou’s passion for motivating and serving others inspired students and peers alike. He will be deeply missed by his family, friends, and all who knew him in and out of the classroom. Lou is survived by his daughters: Isabella Nicoletti and Madison T. Nicoletti; his former wife, Lisa Nicoletti; his brother, Michael Nicoletti (Kathy); his sister, Marie Nicoletti Cariello (John); his three nieces; and his one nephew. UPDATED SERVICE INFORMATION: A memorial service will be held on Thursday, August 12, 2021, at 3:00 PM, at Parsell Funeral Homes and Crematorium, Atkins-Lodge Chapel, 16961 Kings Highway, Lewes, DE, where friends may call beginning at 2:00 PM. Due to the ongoing COVID-19 pandemic, masks are required to be worn by any and all persons participating in any aspect of the services. All who cannot attend in person are invited to join the services via live streaming by visiting the following link: http://www.parsellfuneralhomes.com/obituaries/permalink/9463519/LTWebcast In lieu of flowers, Lou’s final wishes were that memorial contributions be made to Autism Delaware’s Productive Opportunities for Work & Recreation (POW&R) program. Donations can be made through their website or sent via mail to 17517 Nassau Commons Blvd., Unit 1, Lewes, DE 19958.

Louis Richard Nicoletti - most prominently and fondly known as Coach Nic - passed away peacefully on the morning of Thursday, April 9th, at the age of 70, after a courageous struggle with meningioma, a noncancerous tumor of the brain. He spent... View Obituary & Service Information

The family of Louis Richard Nicoletti created this Life Tributes page to make it easy to share your memories.

Louis Richard Nicoletti - most prominently and fondly known as...

Send flowers to the Nicoletti family.