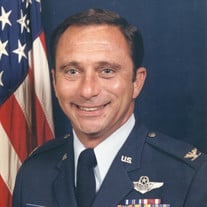 Retired Colonel, Lionel Hudson Luxich Jr., age 74 of Lewes, DE, passed away on Tuesday, February 28, 2017, at his home. He was born Wednesday, April 22, 1942 in Birmingham, AL, son of the late Lionel H. Sr. and Edwina (Harang) Luxich. Colonel Luxich was an Air Force Academy graduate who served his country over a lifelong military career. He was a proud Vietnam Veteran, earning several awards, including the Legion of Merit, Distinguished Flying Cross, Meritorious Service Medal, 1 Silver Oak Leaf Cluster, Air Medal, 3 Oak Leaf Clusters, AF Commendation Medal, AF Achievement Medal, Combat Readiness Medal, National Defense Service Medal, Bronze Service Star, and the Vietnam Service Medal. Colonel Luxich worked at the Pentagon in Washington D.C. until his retirement, after which he was an insurance salesman with Bankers Life in Delaware. He was an ardent lover of Dachshunds; especially his beloved Champion Winner, Atticus. He was a man of great character, who treated everyone he met with dignity and respect. His capacity for loving and giving, and his incredible sense of humor were among his strongest traits. He was a loving, devoted and caring husband, father, grandfather, brother, and friend, and he will be deeply missed by everyone who knew him; especially his adoring family who considered him their hero. In addition to his parents, Colonel Luxich was preceded in death by his beloved wife, Carole Jean Dunn and his sister, Sandra Madison, of Delaware, OH. He is survived by his son, Scott Luxich of Conway, SC; his daughter, Christine Luxich-Aman and her husband David, of Lewes, DE; his grandchildren: Lincoln Aman and Aja Aman of Lewes, DE, and Hudson Luxich and Chase Luxich of Fall City, WA; and his sisters: Sharon Evans of Tuscaloosa, AL, Susann Montgomery Clark of Birmingham, AL, and Shelly Peed of Alexandria, AL. All Services will be private. The family requests donations in Colonel Luxich's memory in place of flowers. Memorial Contributions may be made to the National Parkinson Foundation, 200 SE 1st Street, Suite 800, Miami, FL 33131, or www.parkinson.org, or the Michael J. Fox Foundation, P.O. Box 5014, Hagestown, MD 21741. Please visit Colonel Luxich's Life Memorial Webpage and sign his online guest book at www.parsellfuneralhomes.com. Please sign the online guestbook.

The family of Lionel Hudson Luxich Jr. created this Life Tributes page to make it easy to share your memories.

Send flowers to the Luxich family.