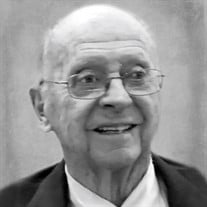 LeRoy W. “Roy” Mitchell, age 95 of Rehoboth Beach, DE, passed away peacefully at home March 16, 2021 surrounded by his loving family. He was born on May 8, 1925 in Laurel, DE, son of the late Leroy and Maude Mitchell. Roy graduated from Laurel High School in 1943. He joined the Navy and served aboard the USS Booth Destroyer Escort in World War II. After returning home from the war, he joined his father in the appliance business. Several years later, Roy and his wife Peggy founded Mitchell’s Furniture. Sixty years later, Mitchell’s Interiors continues to thrive as a fourth-generation furniture legacy. Roy was a long-time member and past president of the Laurel Lions Club, a member of the Laurel Hope Lodge #4, and the Laurel American Legion. He was an avid golfer, loved fishing with his grandsons, dropping off Saturday morning donuts to his great -grandchildren, and slipping treats to his furry sidekick, Julep. Above all, Roy cherished time spent with those he held most dear. He was a loving and devoted husband, father, grandfather, great-grandfather, and friend who will be deeply missed by all who knew him. In addition to his parents, Roy was preceded in death by his sister, Mary Ellen Dutton; and his brothers: Martin Mitchell and Robert Mitchell. He is survived by the love of his life, and wife of 74 years, Peggy Mitchell of Rehoboth Beach, DE; his daughters: Vicki Feist (Roger) of Rehoboth Beach, DE and Krista Anderson of West Palm Beach, FL; his grandchildren: Tristan Allen, Derek Feist (Sarah), Jared Anderson, Meredith Helgren (Blake), Shelby Anderson Butkus (Josef), Trevor Feist, and Delaney Anderson; his eight great grandchildren (plus one on the way); and his sister-in-law, Phyllis Mitchell. A celebration of Roy’s life will be held later this summer. In lieu of flowers, the family requests donations in Roy’s memory to The Lewy Body Dementia Association (LBDA) at www.lbda.org/donate, or Millenium Hospice, 1017 Mattlind Way, Milford, DE 19963. A virtual guestbook is available to sign on the tribute page.

The family of Leroy "Roy" W. Mitchell created this Life Tributes page to make it easy to share your memories.

Send flowers to the Mitchell family.