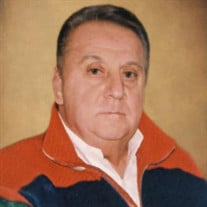 Leon Mesrop Toroian, age 86 of Lewes, DE, passed away surrounded by family, in the early morning of Saturday, August 7, 2021, at his home. He was born on November 21,1934 in Philadelphia, PA, the youngest of four children of the late Krekor and Anna Toroian, both survivors of the Armenian Genocide. While growing up in Philadelphia, Leon helped in the family candy and ice cream factory during busy holidays. He was an artist and interior designer, with a Master’s Degree in Fine Art from the original Philadelphia College of Art. During the early part of his career, he was the head designer for John Wanamaker in Philadelphia, as well as JW Sloane in Washington DC. Leon’s contemporary designs were used in airports, the cruise port of Miami, government offices, and homes around the US and Caribbean. Eventually he opened his own design firm in Main Line Philadelphia until retiring in the late 1990s. Though a talented and successful designer and business owner, Leon’s greatest pride was his only child, Cassandra, spending his weekends taking her to tennis tournaments as she grew up, and encouraging her to follow her passions as she chose a career path in finance. Leon spent his time painting, gardening during the spring and summer, and baking Armenian breads and pastries. He was a Philadelphia Eagles fan and enjoyed watching games with his daughter on weekends. In addition to his parents, Leon was preceded in death by his eldest brother, Simon; his older sister, Helen; and his older brother, George. He is survived by his beloved wife, Marguerite; his devoted daughter, Cassandra; his “dog son,” Zippy; and many nieces and nephews. A funeral service will be held on Thursday, August 12, 2021 at 11:00 AM, at St. Andrew the Apostle Orthodox Church, 33384 Mackenzie Way, Lewes, DE. Interment will be held on Tuesday, August 17, 2021, at 11:00 AM, at Arlington Cemetery, 2900 State Road, Drexel Hill, PA. Please sign the virtual guestbook located on the tribute page.

Leon Mesrop Toroian, age 86 of Lewes, DE, passed away surrounded by family, in the early morning of Saturday, August 7, 2021, at his home. He was born on November 21,1934 in Philadelphia, PA, the youngest of four children of the late Krekor... View Obituary & Service Information

The family of Leon Mesrop Toroian created this Life Tributes page to make it easy to share your memories.

Send flowers to the Toroian family.