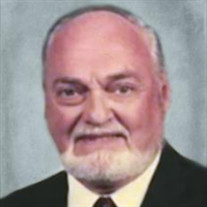 Lee Harris Ardis, 88, of Rehoboth Beach, DE and formerly of Wilmington, DE, passed away on Sunday, January 17, 2021. Born on March 6, 1932, he was the son of Alvin T. Ardis and Anna Mildred Ardis (Lowe). Lee worked in progressive positions at Diamond State Telephone Company, Bell of Pennsylvania, and ultimately retired from AT&T. He spent his second career at Delaware Technical and Community College. Lee graduated from P.S. DuPont High School where he met Jean Chance. Lee and Jean married in 1953 and raised their three daughters: Sherrill Nurnberg (Carl) of Chadds Ford, PA, Sandra Ardis of Media, PA, and Sharon Rakowski (Mark) of Newark, DE. Lee is survived by his wife and daughters as well as his grandchildren: Joseph Nurnberg and Kaitlyn Rakowski. Lee served in the Delaware National Guard in the early 1950s. His favorite place to be was at the beach with his family and in his later years, sitting on his front porch watching other families walk by on their way to the sun and sand. He was an avid swimmer, played handball, and bowled in several leagues. Lee also enjoyed a good game of poker. He could be found at the golf course or watching the Phillies or Eagles on TV, depending on the season. During retirement Lee and Jean enjoyed many bus trips with lifelong friends and made new ones on every trip. Lee also spent time researching his family ancestors. Throughout his life, he volunteered at several organizations such as the Talking Book Program through the Pioneers and the LPGA Golf Tournament supporting the Ronald McDonald House Charities. When he and Jean moved full-time to Rehoboth Beach in 2001, Lee volunteered at Beebe Hospital and for many years, was a member of the City of Rehoboth Beach’s Board of Elections. All services will be private. In lieu of flowers, donations may be made online in Lee’s name to the Juvenile Diabetes Research Foundation at www.jdrf.org or by mail at JDRF, 555 Croton Road, Suite 111, King of Prussia, PA 19406. Please sign the online guestbook located on the tribute page.

The family of Lee Harris Ardis created this Life Tributes page to make it easy to share your memories.

Send flowers to the Ardis family.