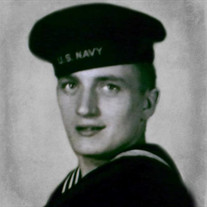 Florist Note- Please deliver all flowers to the Bridgeville Funeral Home on Thursday March 5 by 10 AM. Lawrence William Regelin, known to most as Larry, to his grandchildren as “Growl” and his nieces and nephews as “Unc” passed away peacefully on February 21, 2020 at his home on Ocean View Delaware after a short illness. He was born on May 12, 1932 in Buffalo, NY, son of the late William and Marian Regelin. Larry enlisted in the U.S. Navy in January of 1952. After completing his education as an Aerographer’s Mate at the Naval Technical Training Center in Lakehurst New Jersey, he proudly served aboard the aircraft carrier U.S.S. Lake Champlain, then later the U.S.S Randall. While not usually prone to long conversations on most topics, stories of his Navy adventures were his favorite as he shared tales of his travels to Spain, Italy, and China, as well as his lengthy time at sea and life aboard an aircraft carrier. Later in life he would tell his grandson that his years in the Navy were the best of his life. During his service, Larry earned the Naval Defense Service Medal, the Navy Occupation Service Medal, the United Nations Medal, and the Korean Medal with one Engagement Star. He was honorably discharged on February 1, 1958. After his Naval career Larry went to work for the National Oceanic and Atmospheric Administration (NOAA), where he worked until his retirement. He married his beloved wife Nancy in Maryland. Together they raised their family in Calvert County, traveled to the Maryland and Delaware Beaches, entertained special “Red-Hat” friends for long weekends, and shared an amazing life. Larry and Nancy retired in Bridgeville, Delaware where they were active in the Kiwanis Club. While life will be very different without our beloved father, grandfather, and uncle, we know he is once again in the presence of those he has missed so very much and probably hoping to find a quiet place to watch his Redskins & Orioles play. Perhaps with some divine intervention with Larry as their guardian angel, they can manage a few wins in Larry’s honor. In addition to his parents, Larry was preceded in death by his beloved wife, Nancy, in 2004; his daughter, Melissa Regelin-Sweetman; his grandson, David Bell; his sisters: Marian Wilsand and Joan Kedron; his nephew Lawrence Marcotte; and his niece Robin Cuellar. He is survived by his daughters: Christy Kaiser (James) of Milford, DE and Kelly Grube (David) of Ocean View, DE; his grandsons: Matthew Goldsmith of Philadelphia, PA and Michael Goldsmith of Ocean View, DE; and his granddaughter, Madison Martin (Denis) of Wilmington, DE. He is also survived by his loving, card-sending, brick wall building, partner-in-crime-niece, Melissa Kedron of Strykersville, NY, who made sure to visit often and look out after her “Unc”. Her visits brightened his life immensely, especially after the passing of his wife in 2004. He is also survived by his nieces: Chere’ Rastalli, Renee Speelman, Darlene Kedron, and Jayne Kedron; and his nephews: Joe Cuellar and William Kedron. A graveside service with full military honors will be held on March 6, 2020 at 2:00 PM at Bridgeville Cemetery, 2 North Laws Street, Bridgeville, DE. .

Florist Note- Please deliver all flowers to the Bridgeville Funeral Home on Thursday March 5 by 10 AM. Lawrence William Regelin, known to most as Larry, to his grandchildren as &#8220;Growl&#8221; and his nieces and nephews as &#8220;Unc&#8221;... View Obituary & Service Information

The family of Lawrence William Regelin created this Life Tributes page to make it easy to share your memories.

Florist Note- Please deliver all flowers to the Bridgeville Funeral...