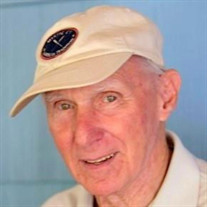 Lawrence “Larry” Robert Burridge, age 89 of Rehoboth Beach, DE, passed away on July 9, 2021 at Genesis Milford Center in Milford, DE. He was born on April 14, 1932 in New London, CT, son of the late Ulysses and Anna Burridge. Larry was a graduate of Stonington High School, Class of 1950. He was a proud veteran, having honorably served in the US Air Force from 1951 to 1953. Following his service to country, Larry attended Thames Valley Technical School for electrical engineering. He later earned his Bachelor’s Degree from University of New Haven. Larry began his career in the electrical field reading meters for the City of Groton Utilities. He progressed to the line crew, then maintained substations with his longtime co-worker, Dex Thaxton. Larry transitioned to engineering and became the electrical engineer for the City of Groton. For his first 40 years, he resided in Mystic, CT, where he grew up. He married the love of his life, Maureen Griswold in New London, CT, in 1976. Larry hand-built the family home in Mystic from start to finish. In 1980, he relocated to Naperville, IL and became the electrical engineer for the Naperville Electric Department. Finally, in 1993, Larry moved to Rehoboth Beach, DE, where he retired from the Delaware Electrical Co-op as electrical manager. During retirement, he and Maureen spent many splendid winter months in Florida. Larry was a skilled woodworker. He crafted many pieces of fine furniture and wooden toys and games for family and friends, that are treasured by all. Larry passed his love of woodworking on to his sons and grandsons. Above all, Larry cherished time spent with those he held most dear. He was a loving and devoted husband, father, grandfather, great-grandfather, and friend who was loved by many and will be deeply missed by all who knew him. In addition to his parents, Larry was preceded in death by his son, Randy Burridge; and his former wife, Lorraine Burridge. He is survived by his beloved wife of 45 years, Maureen (Griswold) Burridge; his children: Robert Burridge (Patricia) of Mystic, CT, Linda Sylvester (Jay) of East Lyme, CT, Ronald Burridge (Marilyn) of East Lyme, CT, Laurie Burridge Kowalik (Chester) of Conroe, TX, Lisa Kelley of Phoenix, Az, Michael Mallon (Robin) of Greenfield, WI, and Kim Mallon of Naperville, IL; his 11 grandchildren; and his 8 great-grandchildren. A memorial service will be held at a later date in Connecticut. In lieu of flowers, the family requests contributions in Larry’s memory to Jimmy Fund, Dana-Farber Cancer Institute, P.O. Box 849168, Boston, MA 02284, or via www.jimmyfund.org/gift. Please sign Larry's virtual guestbook located on the tribute page.

The family of Lawrence "Larry" R. Burridge created this Life Tributes page to make it easy to share your memories.

Send flowers to the Burridge family.