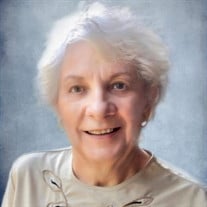 Joyce Janice Hofer passed away peacefully in the early morning of October 6, 2020 in Rehoboth Beach, DE, at the home of her oldest son. She had been in hospice care there since September 30, after a brief hospitalization in Annapolis, MD. She was 87 years old. Prior to her hospitalization, she had been a resident at Spring Arbor, an assisted living and memory care facility in Crofton, MD, since November, 2019. She moved to Spring Arbor from Mountain Home, AR, after the death of her husband Sam. Joyce was born in 1932 on her family’s farm near Davis, SD, the third and last child of Christopher Jibben and Johanna Jibben, nee Nuttbrock. Her father, a veteran of WWI who served in France, died when Joyce was a child. Her family moved into Lennox, SD, where Joyce graduated from Lennox High School. She then completed her training as a registered nurse at Augustana University in Sioux Falls. While working at Sioux Valley Hospital, she met a young minister, Samuel Hofer, who would become her lifelong companion. They married at a country church in Turner County on June 16, 1954, and remained a couple for 65 years until Sam’s death in 2019. Together they moved to the east coast where Sam continued his education and served churches in the Philadelphia area, eventually becoming chaplain at Fredonia State University in upstate NY. Joyce continued to work as a nurse. Joyce gave birth to their first child, Paul, while living in Fredonia. Together they moved to Nebraska City, NE, in 1957, where Sam would serve as minister to the First Presbyterian Church for the next 33 years. Joyce was active as Sunday and Bible School teacher, choir member, and women’s group member. She enjoyed bowling, crafts, and her membership in the PEO sorority. She also worked as a nurse at Nebraska City Manor, a nursing facility, where she paid forward the care she herself would need in the last year of her life. While in Nebraska City, Joyce gave birth to two more sons; Chris in 1959, and John in 1966. Following Sam’s retirement from Nebraska City in 1990, they moved to Mountain Home, AR, where Sam became part-time pastor at 101 Presbyterian Church in Gamalia, where he ministered for another 14 years. Joyce lived in Mountain Home with Sam until his death in September, 2019. She then moved back east to Spring Arbor, near her sons Chris and Paul. She was transferred to the memory care cottage in April, in the midst of the pandemic. Joyce loved food, but in September her appetite began to fail and she no longer walked on her own. After two visits to the Anne Arundel Medical Center for tests and observation, and in accordance with her living will, her doctors and family decided that transfer to hospice care at her son’s home was the best remaining option. Joyce was preceded in death by her beloved mother, Johanna, who died at age 103, and by her brother, Harold and sister, Iva. She is survived by her three sons: Paul, of Washington, DC; Chris and his wife Kelly Vinopal, of Crofton, MD, and granddaughter, Kate, a junior at Cornell University; and John and his wife Elisa Randazzo, of Los Angeles, CA, and their daughter, Verona, a fourth-grade student at the Waldorf School of Pasadena. Joyce’s body was cremated according to her long-standing wishes. She will be interred next to her husband and mother in the graveyard of Turner County Presbyterian Church, in the fertile fields of SD. Please sign Mrs. Hofer's online guest book located on this site.

Joyce Janice Hofer passed away peacefully in the early morning of October 6, 2020 in Rehoboth Beach, DE, at the home of her oldest son. She had been in hospice care there since September 30, after a brief hospitalization in Annapolis, MD. She... View Obituary & Service Information

The family of Joyce Janice Hofer created this Life Tributes page to make it easy to share your memories.

Joyce Janice Hofer passed away peacefully in the early morning...

Send flowers to the Hofer family.