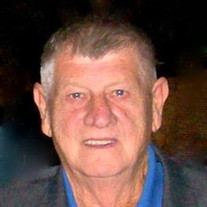 Joseph Ben Pietrowski Jr., 81, passed away on February 8, 2022 from a courageous battle with COVID at Beebe Medical Center in Lewes, Delaware. Although he was vaccinated and had received his booster, he succumbed to Covid Pneumonia. Joseph is survived by his Daughters: Katherine (Charles) Brown Pietrowski, Mary Rose (Larry) Hobman and Colleen Pietrowski, their mother Mary Pietrowski, Son: Joey (Nina) Frazier Grandchildren Erika Komp, Brandon Tsui, Olivia Tsui, Kayla Brown, and Matthew Hobman. Also survived by Brothers: Peter (Patti) Pietrowski, Philip (Theresa) Pietrowski, and his companion Julie Forst and her son Eric Forst. He was preceded in death by his Parents: Joseph Ben (Adelle, nee: Ryznar) Pietrowki Sr. and brother: John (Maryann) Pietrowski. Joseph was born on a large farm in Romulus, Michigan on June 15, 1940. He graduated Milan High School in the Class of 1955. During high school he rose to the heights to become the number one sharpshooter in the State of Michigan. Following his graduation, he was offered a full scholarship to Michigan State. He declined the scholarship and chose instead to serve our great country by enlisting in The United States Navy, where he served for four years. After his military service, he returned home to Michigan, where he settled in to raise his family and return to his love of farming. As much as he loved Michigan, the large farm proved to be too isolating for a young family. He then moved his family to Cape May, New Jersey. He became active in St. Raymond’s Parish, where he volunteered as a CYO basketball coach. Joe had many talents and skills and was affectionately called a “jack of all trades.” He had been in the bricklayers’ unions and laid block for construction of the mall in Rio Grande. He was a master carpenter and could build custom cabinetry. He had a plumbing license, was skilled in auto mechanics and autobody repair and customization. Despite all the skills and trades, farming was his true love. He eventually took up his love of farming again in Cape May and was the owner and operator of Alexander’s Farms on Rt 47 for over 25 years. After retiring from farming, he spent his time in the greenhouses at his home growing flowers and restoring antique John Deere tractors. He was considered a master at tractor restoration and one of his tractors was even shipped to Belgium. He will be sorely missed by all who knew and loved him. Friends are invited to attend a Memorial Service on Saturday, March 5, 2022, at 10:30 am at: Radzieta Funeral Home, 9 Hand Avenue, Cape May Court House, NJ 08210. Interment will follow immediately at: Cape May County Veteran’s Cemetery, 127 Crest Haven Road, Cape May Court House, NJ 08210. In accordance with his wishes, cremation was held on February 14, 2022. The service will be livestreamed for friends that cannot attend in person. The link will be on the Radzieta’s Funeral Home Facebook page under Joseph Pietrowski’s online obituary. Please sign the virtual guestbook located on the tribute page.

Joseph Ben Pietrowski Jr., 81, passed away on February 8, 2022 from a courageous battle with COVID at Beebe Medical Center in Lewes, Delaware. Although he was vaccinated and had received his booster, he succumbed to Covid Pneumonia. Joseph... View Obituary & Service Information

The family of Joseph Ben Pietrowski Jr. created this Life Tributes page to make it easy to share your memories.

Send flowers to the Pietrowski family.