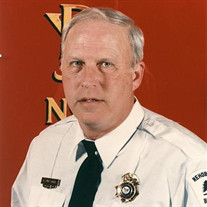 Joseph P. Wastler Beloved Brother, Uncle and Friend It is with great sadness that we announce the passing of Joseph P. Wastler, 69, of Rehoboth Beach, Delaware, on Friday, January 31, 2020 at the University of Pennsylvania Hospital. He was born on October 26, 1950 to the late Clarence F. Wastler, and the late Bernice C. Wastler, owners of the former Treasure House on Coastal Highway in Rehoboth Beach. He is survived by his dear sister B. Jean Wastler of Rehoboth Beach, Delaware; his brother Harry C. Wastler; his nieces Karen Elizabeth, Elizabeth, Kathryn Leigh and Kimberly; his nephews Wayne and Derek; his grand-nephews Nigel, Caleb, Tommaso, Cooper and Curran; his grand-nieces Isabel, Olivia, Emily and Emma; his devoted friend and business partner Leonard Tylecki; and a host of dear friends. He is predeceased by his beloved dogs Freckles, Ginger and Radar. While not a native of Rehoboth Beach, this is where Joe’s heart and life was spent since 1962. He graduated high school in Denton, MD and completed an MBA from Salisbury University in Maryland. Education was a purpose to an end: Joe was an entrepreneur and enjoyed working. He was always on the go. At age 14, he established The Jolly Jumper in Dewey Beach, DE until it was sold to Tom Haley. He worked with the Fasnacht family at Funland just up the street from his home on Brooklyn Avenue. He went on to become a licensed real estate agent and worked with Virginia Joy Realty and DiSabatino Realty. Joe served in the Delaware National Guard for a number of years. He established the Lock and Safe Company with Bill Delle Donne and created Mid-Atlantic Industrial with Walter Brittingham. After receiving his MBA, Joe went on to establish his latest business venture Communications Contractors Corporation with Leonard Tylecki, which originally began as AVC in 1976 with Walter Brittingham. Joe was immersed in life with the Rehoboth Beach Volunteer Fire Company for 48 years, since 1972 when he was just 21. The Rehoboth Beach Volunteer Fire Company became incredibly important to him, inspired by his father Clarence’s service as a volunteer fire fighter in Denton, MD and Rehoboth Beach, DE. He is a life-time member. He was the Secretary of the Fire Company for five years from 1974-1978 and then again for six more years from 1994-1999. He was the Assistant Engineer from 1982-1984. He served as Vice President for two years in 1983 and 1984 and then as President in 1985 and 1986. He was the Chief Engineer in 1987 and 1988. Joe served as the first-ever elected Executive-at-Large in 2008 and served that position for eight years until 2015. He was also involved in the Fire Company’s Pension Committee, Insurance Committee, the construction of Station 2, and the Fire Company’s 100th Anniversary. Furthermore, Joe was actively involved with many committees and events at the County and State levels. Joe was a good friend to everyone he met. He enjoyed his life and his friends and was not ready to leave this life despite his struggle with health issues caused by healthcare treatments that spiraled out of control. Mass of Christian Burial will be held on Friday, February 21, 2020 at 5:00 PM at St. Edmond’s Catholic Church, 409 King Charles Ave., Rehoboth Beach, DE, where friends may visit beginning at 4:30 PM. Immediately following mass, there will be a Fire Fighters’ Procession with Fire Fighter Honors and a Final Alarm at Rehoboth Beach Volunteer Fire Company, Station 1, 219 Rehoboth Ave., Rehoboth Beach, DE. A Celebration of Life will follow at Station 1 from 6:30 PM to 8:30 PM. Interment will be held on Saturday, February 22, 2020 at 1:00 PM at Westminster Cemetery, 17 N. Church St., Westminster, MD. Joe’s legacy with the Rehoboth Beach Volunteer Fire Company will be memorialized with a fund for the maintenance and restoration of the Snorkel Truck he once drove. In lieu of flowers, donations may be sent to the Rehoboth Beach Volunteer Fire Company, Attn: Snorkel Truck, P. O. Box 327, Rehoboth Beach, DE 19971. Please sign Joe’s online guestbook located on this site. At the family's request, please omit flowers.

Joseph P. Wastler Beloved Brother, Uncle and Friend It is with great sadness that we announce the passing of Joseph P. Wastler, 69, of Rehoboth Beach, Delaware, on Friday, January 31, 2020 at the University of Pennsylvania Hospital. He was... View Obituary & Service Information

The family of Joseph P. Wastler created this Life Tributes page to make it easy to share your memories.

Send flowers to the Wastler family.