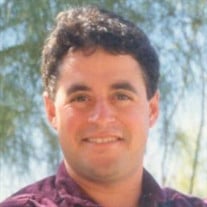 FLORIST NOTE: PLEASE DELIVER ALL ARRANGEMENTS DIRECTLY TO THE CHURCH. Joseph G. Marini, 59, quietly passed away at his home in Milton, DE on Sunday, August 11th. He was born in Wilmington, DE at St. Francis Hospital on March 19th, 1960, the first of the iconic Eleven Marini Children. As a kindergartener, Joe sold garden products on the side of the road, an enterprise which would slowly grow into the thriving Marini Produce that dominates Veale Road today. Joe excelled throughout his school years in both academics and athletics at St. Edmond’s Academy and, later, Archmere Academy. He was then brought to Ithaca, NY by his acceptance into Cornell University, and both the city and the school fed into his love for agriculture. His apprenticeship at Littletree Orchards, however, was what truly prepared him for a life of dirt, sweat, and vegetation. In 1983, Joe turned several acres of Milton woodland into Small Wonder Farm, a thriving tomato and melon farm where he pioneered the use of plastic and trickle irrigation and brought the use of staking vine ripe tomatoes to the state of Delaware. He and his truck of tomatoes were staples at most Delaware produce stands, including the Nassau Orchards Market that he would later help to operate. Joe, compelled by his insatiable drive to learn and to grow, later developed his own method of grafting apples and peaches for Adams County Nursery. He was well respected in the fruit world for his understanding of growing and of fruit disease control. Joe was dealt an unfair hand in life, yet, regardless, fought hard and built a life to be proud of. He was a foe of Asian long-horned beetles and a friend of bees, and, despite his bee allergy, raised several generations of honey-producing hives. He loved to bike and to build, launch, and lose model rockets with his daughters, nephews, and nieces. On Christmas Eve, he would often be found helping with the cooking of the Marinis’ Feast of the Seven Fishes, an extraordinary feat tantamount to him and his daughter’s Strega Nona-esq ventures into the world of homemade spaghetti. He played a mean game of ping-pong and an even uglier game of Monopoly, but we all loved him and love him nonetheless. Joe was preceded in death by his son Leslie Gerard Marini. He is survived by his daughters, Deborah Knapp and Kathryn Frances Marini, their mother and close friend, Gay Knapp Marini, and his parents, Dante and Bernardine Marini. “Joey” is also survived by his ten siblings and their spouses: Patricia Allegretto (Dave), Denise Lougheed (Bill), Linda Olivere (Paul), Kathleen Wheeler (Jeff), Dante (Tracey), James (Jackie), Marianne Horgan (Michael), Theresa Kain (Kevin), Michael (Wendy), and Angela Ryan (Sean), in addition to his twenty-five talented nieces and nephews, who he was extremely proud to be related to. A service will be held on Friday, August 23rd, 2019, at 11:00 a.m. at Bethel United Methodist Church, 129 W. 4th Street in Lewes, with a visitation from 10:00 to 11:00. In lieu of flowers, the family suggests contributions be made to the Delaware Agricultural Museum, 866 N. DuPont Highway, Dover, DE 19901. Please sign the online guestbook located on the tribute page.

FLORIST NOTE: PLEASE DELIVER ALL ARRANGEMENTS DIRECTLY TO THE CHURCH. Joseph G. Marini, 59, quietly passed away at his home in Milton, DE on Sunday, August 11th. He was born in Wilmington, DE at St. Francis Hospital on March 19th, 1960, the... View Obituary & Service Information

The family of Joseph G. Marini created this Life Tributes page to make it easy to share your memories.

FLORIST NOTE: PLEASE DELIVER ALL ARRANGEMENTS DIRECTLY TO THE...

Send flowers to the Marini family.