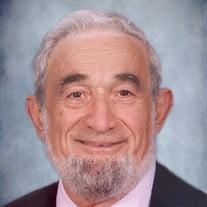 FLORIST NOTE: PLEASE DELIVER ALL ARRANGEMENTS BY 3PM FRIDAY, OCTOBER 4, 2019 TO OUR LEWES LOCATION. Joseph Alfonso Iandolo, age 94, of Rehoboth Beach, DE, passed away on Wednesday, August 28, 2019 at his home, surrounded by family and friends. A first generation American, he was born on August 27, 1925 in Jersey City, NJ, and raised in Brooklyn, NY, son of the late Antonio and Caroline (Garone) Iandolo. A World War 2 veteran, Mr. Iandolo enlisted in the Navy at the tender of age of 17 and served honorably in the Pacific. Upon returning to civilian life, he enrolled in the Engineering Department at Catholic University and earned advanced degrees. While studying in Washington, Mr. Iandolo met the love of his life, Marguerite (Sheridan) Iandolo. They eventually moved to Rockville, MD, where they raised four children. Mr. Iandolo spent his entire career at the Naval Ordnance Laboratory in White Oak, MD, working on the advancement of Wind Tunnel technology and research and development of surface warfare weapon systems. He received many accolades for his work and often said there wasn’t a single day he didn’t enjoy his work. He still found time to coach youth basketball and volunteer his time to the Rockville Board of Elections. In 1983, the couple relocated to Rehoboth Beach, DE to enjoy their retirement. His life in Rehoboth was very full. Mr. Iandolo was very active with the St. Vincent de Paul Society at St. Edmund Church in Rehoboth, where he volunteered for 37 years, helping those in need. He was in the inaugural group, covering all of Sussex County. He would often personally visit the clients, advising them on how to better their lives. His easy demeanor and genuine empathy endeared him to many. Mr. Iandolo was always quick to help others, dropping everything to tutor a child struggling with math, fix a bicycle, or gently soothe the family puppy who impaled his paw with a fish hook. A sports lover, he often created ball games on the beach. He was addicted to college sports, particularly his beloved Notre Dame football. Throughout his life, Mr. Iandolo was fun to be around and made everyone feel welcome. He was humble and generous and asked for nothing. It wasn’t until he was well into his nineties that he made a purchase for himself, an article of clothing that he deemed frivolous, but still enjoyed. He loved to spend time outdoors gardening, reading on the porch with Rehoboth Bay outside, and walking on the boardwalk. His friendships were important to him and extended from neighbors to life-long college friends. Above all, Mr. Iandolo cherished time spent with those he held most dear. He was a loving and devoted husband, father, grandfather, and great-grandfather who will be genuinely missed by all who knew him. His values of hard work, drive, and passion for what you do will continue on in the generations that follow. In addition to his parents, Mr. Iandolo was preceded in death by his beloved wife of 66 years, Marguerite (Sheridan) Iandolo on August 23, 2018; his brothers: Angelo Iandolo and Albert Iandolo; and his sister, Caroline Caliguiri. He is survived by his children: Cathleen Streich (Eric), Michael Iandolo (Jackie Granger), Stephen Iandolo (Mary) and Brigid Heichel (Eric); his grandchildren: Alexander, Matthew (Colleen), Meaghan (Chad), Colleen, Michael (Rachel), Mark, Mackenzie and Jackson; and his great-grandchildren: Charlotte and Cooper. A Mass of Christian Burial will be celebrated on Saturday, October 5 at 11:30 AM at St. Edmund Catholic Church, 409 King Charles Avenue, Rehoboth Beach, DE where friends may visit beginning at 10:30 AM. Internment will take place at a later date at Arlington National Cemetery, Arlington, VA. In lieu of flowers, the family suggests contributions to the Wounded Warrior Project, PO Box 758517, Topeka, KS 66675, or www.woundedwarriorproject.org. Please sign the online guestbook located on the tribute page.

The family of Joseph Alfonso Iandolo created this Life Tributes page to make it easy to share your memories.

Send flowers to the Iandolo family.