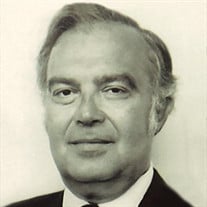 Joseph Benjamin Roy, Jr., "Ben", age 81 of Rehoboth Beach, DE, passed away on Saturday, April 18, 2020 at Delaware Hospice Center in Milford, DE. He was born on June 9, 1938 in Easton, PA, son of the late Joseph B. Sr. and Elma T Roy. Ben was a graduate of Dover High School and Goldey-Beacom College. He honorably served the State of Delaware as the Deputy Fire Marshal before being promoted to the position of Delaware State Fire Marshal, where he remained until his retirement. In 1991, Ben went to work for the National Fire Protection Association, where he was the Executive Secretary of the Fire Marshals Association of North America, until his retirement in 2011. He served as a councilman on the Town of Clayton Town Council, was a Life Member of the Cheswold Volunteer Fire Company, a Life Member of the Citizens Hose Company of Smyrna, a charter member and past president of the Delaware Chapter of the International Association of Arson Investigators, a member of the Delaware Volunteer Firefighters Association, a Mason in the Ancient Free and Accepted Masons, Harmony Lodge No. 13, and was a member of the Dewey Beach Lions Club. A passionate and talented cook, Ben owned and operated Scully’s Café with his wife, Sharon, in Dewey Beach, DE. He was happiest spending his summers surrounded by his children and grandchildren in Dewey Beach, and winters with his wife in Aruba, where he was affectionately known as “Poppy”. He was a loving and devoted husband, father, grandfather, and friend who will be deeply missed by all who knew him. It’s been a hoot. In addition to his parents, Ben was preceded in death by his brother, James Roy. He is survived by his beloved wife of 37 years, Sharon S. Roy; his children: Andy Roy (Kelli), Deb Bringman (Fred), Stacy Mullin (Pat), and Jadi Desmond (Amy); and his nine grandchildren. Due to the ongoing COVID-19 pandemic, a memorial service will be announced at a later date. In lieu of flowers, the family requests contributions in Ben’s memory to Delaware Hospice Center, 100 Patriots Way, Milford, DE 19963, or www.delawarehospice.org/donate. Please sign the online guestbook located on the tribute page.

The family of Joseph "Ben" Benjamin Roy created this Life Tributes page to make it easy to share your memories.

Send flowers to the Roy family.