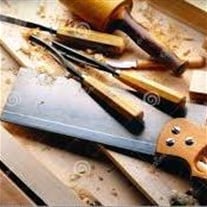 Josef Fink, 87, of Milton, Delaware, formally of Shokan, New York, and Ridgewood, New York, died peacefully on Tuesday July 7, 2020 at home with his family by his side. Born March 18, 1933, in the town Russbach in the Gottscheer region of Austria, Joe was the fourth of ten children born to the late Johann and Juliana Fink. Growing up on a farm in Austria during his formative years, Joe developed an early love of animals and nature. Later in life this manifested into enjoying daily walks, often accompanied by his grandchildren who truly enjoyed their walks with “Opa”. Accompanied by his younger sister, in 1956 Joe followed the footsteps of his older brothers and immigrated to the United States landing in Queens, New York. Here he began his journey into a lifelong career as a master journeyman carpenter with over 50 years of membership in the United Brotherhood of Carpenters and Joiners of America. He maintained a high regard for the union values of hard work and fine craftsmanship and demonstrated these values in all he did. In 1966, Joe embraced his new country by becoming a US citizen. Although he grew up in war torn Europe, attending school sparsely as time permitted, he developed a daily routine of reading the New York Times, keeping up on his favorite hockey and soccer teams as well as the unfolding events of his homeland. In 1962, Joe began another lifelong adventure with his marriage to Christiana Bitterer. For the remainder of his life, Joe and Christl would work together, hand in hand, side by side, building their home in upstate New York and meticulously maintaining the grounds around it. Joe took great pride in the home he built, paying for it as they went - breaking ground in 1974 and completing it in 1982 without a mortgage. In addition to Christl, Joe also had a lifelong love affair with Volkswagens, owning ten different Volkswagens over the years and never driving anything else. A simple man with few material needs, Joe insisted on purchasing good, quality products and taking care of them for life. Proud of his Gottscheer heritage, Joe belonged to the Gottscheer Hall in Ridgewood NY. Later in life to escape the harsh winters of upstate New York and simplify their living arrangements, Joe and Christl moved to Milton, Delaware in 2016. In addition to his parents, Joe was pre-deceased by his oldest brother, Frank. In addition to his wife, Joe is survived by his son, Frank Fink (Joanne) of Poughkeepsie, NY; his daughter Elisabeth Dean (John) of Milton, DE; his grandchildren: James Fink (Laura); Erika Fink; Thomas Fink (Briana); and Christopher Dean; and his great granddaughter Sadie Fink. Additionally, Joe is survived by 8 brothers and sisters: Alfred Fink and Johanna Maichin of Queens, NY; Rosi Brunnhuber and Albert Fink of Germany; Frieda Sterner, Adolf Fink, Richard Fink, Maria Lederer of Austria, along with numerous nieces and nephews. Due to the COVID-19 situation, services and burial will be limited to immediate family only. Burial will take place at Ashokan Rural Cemetery in upstate New York. A celebration of life will be scheduled at a later date. In lieu of flowers, donations may be made to Parkinson’s Foundation: Believe in Better, 200 SE 1st Street, Suite 800, Miami, FL 33131 www.parkinson.org Please sign the online guest book at this site.

Josef Fink, 87, of Milton, Delaware, formally of Shokan, New York, and Ridgewood, New York, died peacefully on Tuesday July 7, 2020 at home with his family by his side. Born March 18, 1933, in the town Russbach in the Gottscheer region of Austria,... View Obituary & Service Information

The family of Josef Fink created this Life Tributes page to make it easy to share your memories.

Send flowers to the Fink family.