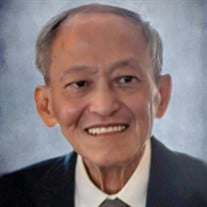 Dr. Jose Castro Pamintuan of Lewes, Delaware, a well respected cardiologist, passed away on Monday June 28, 2021. He spent the month of June at home in the loving company of his wife of 53 years, Dr. Elvira Lacdao Pamintuan, and his five children Maria Anita, Maria Alyssa, Maria Aimee, Jose Delfin, and Cristina Marie. Dr. Pamintuan was 84. Dr. Pamintuan was born in Calulut, San Fernando, Pampanga, son of Delfin Pamintuan, a school teacher and farmer, and Maria Castro Pamintuan, a homemaker and farmer. As a top student at San Fernando High School he earned a seat at the University of the Philippines College of Medicine. In college he joined Phi Kappa Mu and sang tenor in The Four Aces, an a capella group. He received his Doctor of Medicine degree in 1961. In 1962 he traveled to the United States to further his training both at Church Home and Hospital, then affiliated with Johns Hopkins Hospital, in Baltimore and at Bronx Lebanon Hospital in New York City. Afterwards he completed a postdoctoral fellowship in cardiology at the University of Pennsylvania, where he met his wife, Elvira Lacdao, then a resident in Obstetrics and Gynecology at Philadelphia General Hospital. More intensive training in cardiology followed at Temple University Hospital and Hahnemann Hospital, both in Philadelphia. At that time, he co-authored several research papers on the action potential of the human heart and the mechanisms of cardiac arrhythmias which were published in The American Journal of Cardiology. He also wrote a seminal work on hyperlipidemias published in The Lancet, considered by many to be the world’s premier medical journal. In 1970 he moved to Seaford, Delaware to lead the Coronary Care Unit and to establish a new Intensive Care Unit at Nanticoke Memorial Hospital. He developed the nurse training programs for both departments, teaching many of the classes himself. Shortly thereafter he became President of the Medical Staff and was the first medical staff president to be named to the Board of Directors at Nanticoke. He also served on the editorial board of the Medical Society of Delaware and was formerly chairman of the Sussex County Heart Association. With private practices in both Seaford and Dover, Delaware his energy knew no bounds, and his passion for the Philippines was expressed in his work with charitable organizations including Ding Kampangan, an annual medical mission he cofounded with his friend the late Dr. Camilo Gopez, a neurosurgeon of Wilmington, Delaware. He served as President both of the University of the Philippines Medical Alumni Society in America (UPMASA) (2001-2003) and the Delaware Valley UPMASA (1998-2001). He cofounded and was President of Hope Medical Clinic in Dover, a free clinic for uninsured adults, which he conceived of and established with three fellow Filipino physicians. Veterans of medical missions to the Philippines, the four doctors wished to bring the spirit of these charitable missions back to Delaware to serve the poor and uninsured. Before retiring in 2011, he worked as a physician in the Delaware state correctional system, caring for men whom society had forgotten. He believed in their right to good medical care and pondered the difficult life circumstances that had brought many of them to prison. He cared for them as he would any patient and was never seen without a history book to accompany him on breaks. During this time he also cared for developmentally disabled and chronically ill residents at the Stockley Center in Georgetown, Delaware. Dr. Pamintuan was an avid fisherman with keen knowledge of Delaware and Maryland waterways, which he navigated with his son Jose at his side on his trusty yacht, Cristina, named after his youngest daughter. Perhaps the marshy waters of Delaware reminded him of the muddy rivers of his youth in the Philippines, which he hoped to return to one day. He loved steamed clams, blue crabs, and his favorite, raw oysters. He followed sports and was interested in world cultures, especially their politics and regional foods. He loved to sing Filipino kundiman (love songs) and American classics including “Over the Rainbow,” which he sang with his children in five-part harmony. He sought harmony both in song and in life and was a deep believer in social justice and equity, which he expressed throughout his life as a physician and community leader. In addition, he often caught people off guard with his great and unique sense of humor. He was predeceased by his parents and eight siblings, whose families he cared for however possible. Over the decades, he sent numerous nieces, nephews, grandnieces, and grandnephews to college, a testament to his belief in the value of education and supporting the next generation. He is survived by his wife, five children, granddaughters Maria Sofia Pamintuan Fusco and Emma Isabella Pamintuan Fusco, sons-in-law Dino Fusco (married to Maria Anita) and Gijsbert Grotenbreg (married to Cristina Marie), and extended family in the Philippines. Dr. Pamintuan's Mass of Christian Burial will be held on Saturday July 10, 2021 at St. Jude the Apostle Catholic Church at 152 Tulip Drive in Lewes, Delaware at 11AM. There will be a visitation from 10 to 11. All who cannot attend in person are invited to join the services via live streaming by visiting the following link: https://www.youtube.com/channel/UC2vnHlr2UccJsuItv_Xrzhg In lieu of flowers the family requests donations to Hope Medical Clinic at Modern Maturity Center in Dover, Delaware and University of the Philippines General Hospital through UPMASA at www.upmasanational.org Please sign the virtual guestbook located on the tribute page.

Dr. Jose Castro Pamintuan of Lewes, Delaware, a well respected cardiologist, passed away on Monday June 28, 2021. He spent the month of June at home in the loving company of his wife of 53 years, Dr. Elvira Lacdao Pamintuan, and his five children... View Obituary & Service Information

The family of Jose Castro Pamintuan created this Life Tributes page to make it easy to share your memories.

Send flowers to the Pamintuan family.