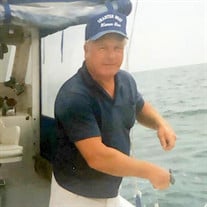 John Joseph Nedelka "Captain John", age 76 of Frankford, DE, passed away on Saturday, May 16, 2020, at Beebe Healthcare, in Lewes, DE. He was born on March 22, 1944 in Philadelphia, PA, son of the late John and Anne (Hrupsa) Nedelka. John began his career as an iron worker, worked for Boeing RotorCraft Systems for a short period and was a welder fabricator. He truly found his calling, however, when he became a Charter Boat Captain and owner of the Karen Sue charter boat. John was at home on the water, and he genuinely enjoyed life on the ocean. He retired in 2019, after 41 adventurous years as owner and Captain. John was a member of the Moose Lodge and had many other interests, including fishing (of course), hunting, and planting and tending his vegetable garden. None so much compared, however, to the time spent with those he held most dear. John was a loving and devoted husband, father, grandfather, brother, and friend who will be genuinely missed by all who had the opportunity to know him. In addition to his parents, John was preceded in death by his sister, Joann Campbell. He is survived by his beloved wife of 33 years, Linda (Busch) Nedelka of Frankford, DE; his son, John F. Nedelka (Kathy) of Clayton, DE; his daughters: Debbie Barberi (Michael) of Morgantown, PA and Jennifer Rongaus (Christopher) of Honey Brook, PA; his step-daughters: Wendy Hunter of Endwell, NY and Suzanne Lucky(Mike) of Robesonia, PA; his grandchildren: Brenden Nedelka, Kevin Barberi, Caitlin Leonard, Dylan Hunter, Darby Lucky, Delany Lucky, and Molly Lucky; his sister, Rosemary Bieber of Wilmington, DE, and his ex-wife Karen Jordan of Exton, PA; and family friend, Kayleigh Mathew (who affectionately called him Captain Pop Pop). Due to COVID-19 restrictions, a memorial service will be held at a later date so a proper memorial can be arranged in his honor. Please sign the online guestbook located on the tribute page.

John Joseph Nedelka "Captain John", age 76 of Frankford, DE, passed away on Saturday, May 16, 2020, at Beebe Healthcare, in Lewes, DE. He was born on March 22, 1944 in Philadelphia, PA, son of the late John and Anne (Hrupsa) Nedelka. John... View Obituary & Service Information

The family of John Joseph Nedelka created this Life Tributes page to make it easy to share your memories.

Send flowers to the Nedelka family.