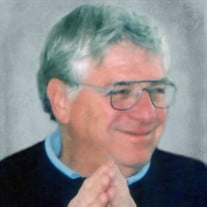 John Anthony "Jack" Mooney, 82 of Lewes, Delaware, died peacefully in the presence of family on September 29, 2021, after a courageous battle with glioblastoma. Jack was born on January 20, 1939, in Baltimore, Maryland. One of the first preemies to survive at Mercy Hospital, he established a pattern he would keep throughout his life: he was early for everything. Jack and his wife Sandra, both Maryland natives, married in 1962 after four years of dating. They moved to Howard County, Maryland from Silver Spring in 1970, where they raised four daughters. Jack became a lifelong advocate for women as a result. He enjoyed working his entire career as a cartographer and manager for NOAA, but his family always came first. Jack and Sandra retired to Lewes, Delaware in 2013. Jack loved life and did whatever he could to make the world a better place for his family, friends, and community. He was rarely idle. There was always a fun project, an idea to discuss, or something to accomplish. Jack particularly loved working on projects that beautified his family's environment. He built additions to the family's home, as well as constructed a vacation home in Ocean City, Maryland. "The Beach House" was a hub of activity for his children and grandchildren and enjoyed by the family for many years. Jack's sanctuaries were his workshop and his garden, one of the most established and colorful gardens in his neighborhood. He spent countless hours in his workshop building furniture and toys for his children, grandchildren, and great-grandchildren. Jack relished his family. He appreciated the unique personalities and talents of each member and good-naturedly embraced the chaos that came with a large, boisterous clan. He was most proud of the fact that each of his three surviving daughters have long, loving marriages of over 30 years. Jack was an unselfish man with his time, volunteering and leading numerous community efforts. He served as a coach and commissioner of AYRA girls' softball, coached CYO girls' basketball, was a board member for Hammond Park Pool, and served on the St. Louis Parish Council. After retiring to Lewes, Jack was active in the boat building program, helped build the playground at Canalfront Park, and volunteered weekly at Beebe Cardiac Rehabilitation after surviving major heart surgery in 2010. Jack made friends everywhere he went. Errands like going to the bank or deli were opportunities for him to catch up with people. He always maintained a sense of humor and was an eternal optimist. He loved his wife, children, grandchildren, and great-grandchildren unequivocally. Jack will be missed by everyone who knew him. Jack was preceded in death by his parents: John A. Mooney, Sr. and Anna Peroutka Mooney; and his youngest daughter, Heather. He is survived by Sandra, his wife of 59 years; his daughters: Jacqueline Andrews (Jack), Cynthia Deckman (Lloyd), and Kathleen Langr (Jeffrey); his grandchildren: Katie, Tim, Andrew, Grace, Mollie, Michael, Temple, and Anna and their spouses; his great-grandchildren: Warwick, Calvin, and Eleanora; and his sister JoAnn Mooney Nasuta (Anthony); and his many nieces and nephews. A Mass of Christian Burial will be celebrated on Thursday, October 7, 2021, at 11:00 AM, at St. Edmond Catholic Church, 409 King Charles Avenue, Rehoboth Beach, DE, where friends may visit beginning at 10:00 AM. Interment will be private. Due to the ongoing Covid-19 pandemic, masks and social distancing are recommended. Please sign the virtual guestbook located on the tribute page.

John Anthony "Jack" Mooney, 82 of Lewes, Delaware, died peacefully in the presence of family on September 29, 2021, after a courageous battle with glioblastoma. Jack was born on January 20, 1939, in Baltimore, Maryland. One of the first preemies... View Obituary & Service Information

The family of John Anthony Mooney Jr. created this Life Tributes page to make it easy to share your memories.

Send flowers to the Mooney family.