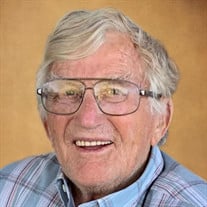 John Henry Rhodes, of Lewes, Delaware passed away Sunday June 13, 2021 at the age of 91 at the Delaware Hospice Center located in Milford, Delaware. John was born to the late Harry Bernard Rhodes and Helen Louise Ross on Thursday September 5, 1929 at home on the family farm located in Centreville, Maryland. He was the third of eight children. He attended Queen Anne County schools and graduated from Church Hill High School in 1946. Upon graduation, he went to work for the Maryland Department of Highways for many years during which, he worked on the construction on the Baltimore Harbor Tunnel. He entered the United States Army in the spring of 1953 as a Medic serving in Germany. He was honorably discharged in late 1955. Upon discharge he returned to Maryland’s Eastern Shore and went to work selling Wholesale Plumbing and Heating goods for the James Haupt Company in Chestertown, Maryland. In August of 1957, he married the love of his life, Virginia Moore Brice of Rock Hall Maryland and they made their home in Church Hill, Maryland until moving to Lewes, Delaware in the summer of 1964. John worked as a Salesman for Hajoca from 1964 thru 1979, selling Wholesale Plumbing and Heating Supplies throughout the Eastern Shores of Delaware, Maryland, and Virginia until they were bought out by Shore Distributors Inc. of Salisbury, Maryland. John continued his career as a Salesman and became the Branch Manager for Shore Distributors in their Lewes location until retiring in 1995. While he and his wife were raising their family he was busy giving tirelessly of his time and talent to his community. He was very involved in Lewes Little League serving in numerous roles and serving as President for many years. John ran for and was elected to the Lewes City Council and was sworn in on May 12, 1975. He ran for and was elected to 9 consecutive 2 year terms, serving on behalf of the residents and the city of Lewes for 18 years. During his tenure, he worked with various organizations and groups within the city and throughout Sussex County. John was a long time parishioner at Saint Edmonds/Saint Jude’s Roman Catholic Church until due to population growth they divided the area into two separate parishes. He was a weekly usher and served on the Parish Council for several years. He was a member of the Knights of Columbus, Council 7297. He is survived by his daughter Lisa Kay Rhodes George of Ocean Pines, his son John David Rhodes and wife Anita S, of Blackstone, Virginia, his grandson and namesake, Michaelson John Capuano of Washington, DC and Ocean Pines. His brother Joseph Rhodes (Loretta) of Towson, and his sister Helen Milley of Wilmington. He was proceeded in death by his wife of 52 years, Virginia Moore Brice and his grandson Jameson Ward George. Friends may call on Sunday, June 20, 2021, from 4:00 to 6:00 PM at Parsell Funeral Home & Crematorium, Atkins-Lodge Chapel, 16961 Kings Highway Lewes, Delaware A Mass of Christian Burial will be celebrated at 10:00 AM on Monday, June 21, 2021 at St. Jude the Apostle Roman Catholic Church located at 152 Tulip Drive Lewes, Delaware. Interment will be at 2:30 PM at Chesterfield Cemetery, located in Centreville Maryland. In lieu of flowers the family suggests memorial contributions in John’s name be sent to Meals on Wheels of Lewes-Rehoboth located at 32409 Lewes Georgetown Hwy. Lewes, DE 19958 or Delaware Hospice Center located on Patriots Way Milford, DE 19963 Please sign Mr. Rhodes guest book at this site.

John Henry Rhodes, of Lewes, Delaware passed away Sunday June 13, 2021 at the age of 91 at the Delaware Hospice Center located in Milford, Delaware. John was born to the late Harry Bernard Rhodes and Helen Louise Ross on Thursday September... View Obituary & Service Information

The family of John Henry Rhodes created this Life Tributes page to make it easy to share your memories.

Send flowers to the Rhodes family.