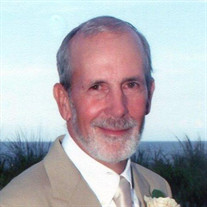 John E. Bacon, age 78, passed away on August 13, 2020 at his home in Fenwick Island, DE. His spouse Carolyn and oldest son,Timothy were by his side.He was the son of the late Dr. Frank S. and Lucille C. Bacon, of Washington, DC and lived there, or in the nearby Maryland suburbs for most of his life. Though John left to attend St. Vincent Prep High School in Latrobe, PA, he returned to DC to attend George Washington University, where he studied International Affairs as both an undergraduate and graduate student from 1960 to 1966. He was recruited into the CIA in 1966, serving first as an analyst, but subsequently working in several other intelligence disciplines over his career spanning 35 years. John rose to the senior ranks, retiring as an Office Director in 1997. He paused in that career several times; once to attend the University of Indiana in Bloomington, where he earned graduate degrees in Public Administration and Organizational Psychology, and later, when he was assigned to the Federal Executive Institute in Charlottesville, VA, teaching and developing a new and aspiring cadre of Federal senior managers. John loved teaching and taught undergraduate courses in Public Administration and Behavioral Science for the University of Virginia as a part time adjunct professor for almost 10 years. After his retirement in 1997, John moved first to the waters off the Potomac River in Virginia, where he spent 4 years building a house on his own, restoring old outbuildings, and writing about the Indians who once lived there, for the local historical association. He developed a mentoring program for at risk kids with the local county, acquiring grants from the state from tobacco settlement funds. He finally settled on the Delaware Beaches in 2002 because of his love of the inland bays. John was a sailor and naturalist and could be found in the summer months on the Rehoboth Bay competing in local small boat races, or cleaning up the bays. He was a volunteer for the Retired Senior Volunteer Program of Sussex County and active in his local community where he was a board member and served on several committees. He met his surviving spouse, Carolyn Bacon, in 2005 and they were married in 2007. John and Carolyn were often seen walking hand in hand along the ocean and bays. John's favorite times were with his family. He was blessed with three children, Timothy, Joshua, and Brooke, and spent much of his time with them, playing in the yard or coaching sports. They were the delight of his life and with little provocation he could spin long stories about the joys he experienced with his kids. John was an avid camper, and many weekends were spent in the state parks around a camp fire. In addition to his parents, John was preceded in death by his sister, Mary. He is survived by his spouse, Carolyn; his three children; his step-daughter, Tiffany Climent; his grandchildren: Reed, Sophie, Phoebe, Finn, Emma, Maya, and Tessa Bacon, Hannah DiNinno, and Melanie and Sophia Climent; his sister, Frances Holly; and many nieces and nephews. A funeral service will be held on October 17, 2020 at 1:30 PM at Bethel Mariners Methodist Church, 81 Central Avenue, Ocean View, DE, where friends may visit beginning at 12:30 PM. A celebration of John's life will follow the services at VFW Post 7234, 29265 Marshy Hope Way, Ocean View, DE, from 3:00 PM to 5:00 PM. Contributions in John's memory may be made to any cancer treatment or research institute. Please sign the online guestbook located on the tribute page.

John E. Bacon, age 78, passed away on August 13, 2020 at his home in Fenwick Island, DE. His spouse Carolyn and oldest son,Timothy were by his side.He was the son of the late Dr. Frank S. and Lucille C. Bacon, of Washington, DC and lived there,... View Obituary & Service Information

The family of John Edward Bacon created this Life Tributes page to make it easy to share your memories.

Send flowers to the Bacon family.