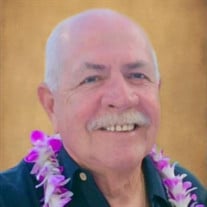 John Allen, 77, formerly of New Castle, Delaware, and more recently residing in Big Pine Key & Sebastian, Florida, passed away in Delaware on August 15, 2020 surrounded by his loved ones. He was born on January 19, 1943 in Wilmington, Delaware, son of the late Albert and Catherine Allen. John graduated from Salesianum High School in 1961 and was married to Carol Woerner on March 16, 1963. They were married for 57 years. Everyone who knew John could attest to his work ethic. He was an incredibly hard worker and always provided for his family. John started working at 10 years of age, delivering newspapers before school and he maintained a job to pay for his education. At the age of 15, he joined the civil air patrol, which sparked his interest in the military. After graduation, John joined the Delaware Air National Guard in 1963 and worked as an aircraft mechanic. In 1969, his best friend Jack suggested they learn to fly helicopters, rather than fix them. In true John fashion, he was wholeheartedly up for the adventure. He joined the Delaware Army National Guard in 1969 as an army helicopter pilot. He proudly served his country for 32 years. John started with a fixed wing pilots license and retired from Company E 150th Aviation in 1995 as chief warrant officer in the State of Delaware. In addition to his service, John also had a thriving career working for CSX railroad as a terminal manager and in 2002 after 38 years, he retired to the Florida Keys. Even in retirement, John had to keep busy. He would retreat to his shop to build and fix just about anything, he chartered boats for tourists, and even operated cranes. He was an avid lover of the water and earned his Captains license at a young age. If he wasn’t boating or offshore fishing, you could find him underwater, scuba diving. John passed on his love for these hobbies to his family, and they frequently enjoyed traveling and diving new places together. As if exploring the world from underwater wasn’t enough of a thrill, John also flew small aircrafts for leisure at every opportunity. He took one last flight around his hometown in May, with his grandson, Zack. John was respected and adored by his family and friends and was the life of every party. He had an ornery and overwhelmingly loving spirit and was eager to teach and inspire the generations that followed him. He would greet you with his infectious smile, a cold beer, and a witty one-liner that would knock you off your feet. In addition to his parents, John was preceded in death by his brother, Michael Allen; his sister, Carol Cushner; and his in-laws: James and Helen Woerner. He is survived by his loving wife, Carol; his daughter, Jan Baldt (Chris); his son, Fran Allen; his grandchildren: Zachary King (Marissa); Katelyn Townsend (Perry); Schuyler Wisniewski (Susan); Brooke Finney (Rob); Noelle Wisniewski; his great-grandchildren: Ellie, Quinn, and Emma; his fur-daughter, Lillie; and a tremendous number of additional grandchildren, great-grandchildren, sisters, a brother, cousins, nieces, nephews, friends, and neighbors, all of whom he loved dearly. A private funeral with full military honors will be held at Delaware Veterans Memorial Cemetery in Millsboro, Delaware. A public celebration of life will be held at the beach in Pot-Nets Bayside on Friday, August 28, 2020 at 4:00 PM. John’s family encourages all his loved ones and friends to attend the celebration. In lieu of flowers, donations in Johns memory are suggested to Sonshine Equine Horsemanship & Therapeutic Riding Center, 31688 Yeshua Lane, Millsboro, Delaware 19966. The family of John would like to extend their heartfelt gratitude to the incredibly caring and compassionate nurses and staff of Delaware and Florida Hospice organizations. Please sign the online guestbook located on the tribute page.

John Allen, 77, formerly of New Castle, Delaware, and more recently residing in Big Pine Key & Sebastian, Florida, passed away in Delaware on August 15, 2020 surrounded by his loved ones. He was born on January 19, 1943 in Wilmington, Delaware,... View Obituary & Service Information

The family of John Albert Allen created this Life Tributes page to make it easy to share your memories.

Send flowers to the Allen family.