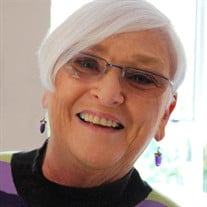 Jillian A. Bradley, Retired Teacher Jillian A. Bradley, aged 75, of Rehoboth Beach, DE passed away surrounded by her family on Sunday, August 11th at Harbor Healthcare in Lewes, DE after a long illness. Jillian was born March 9th, 1944 in Dunedin, New Zealand, the daughter of Ash and Nance McGuinness. She is survived by her husband of 54 years, David R. Bradley; two daughters: Tracey Bradley of Atlanta, GA and Alison White and husband, Brian of Lewes; three grandchildren: Bradley, Molly, and Morgan White, all of Lewes, and her siblings: Jane McGuinness and John McGuinness of Lower Hutt, New Zealand. Jillian was preceded in death by her brother Paul McGuinness of Dunedin, New Zealand. An immigrant, Jillian arrived in the United States in 1965 after meeting and marrying her American husband, David, who was stationed in New Zealand while serving in the US Navy. Having never been overseas, she courageously left her family back home to make a new life in the US. Jillian became a US citizen in 1989. She never lost her deep connection to and pride in her beloved homeland of New Zealand and remained a dual national for the rest of her life. Her keen awareness of international affairs and travel has become part of the fabric of her extended family. Jillian was a dedicated educator and a continuous student. She earned her Elementary Teaching Certificate from Dunedin Teacher’s College in New Zealand and a Bachelor of Science in Elementary Education, Reading Specialist Certificate, and Master of Arts in Education from Millersville University in Pennsylvania. She obtained the latter while working full-time as a teacher and raising two children. Jillian taught at St. Anne’s Catholic School and Reynolds Junior High School in Lancaster, PA as a fourth-grade teacher, Reading Specialist, and English as a Second Language teacher. A dynamic educator, she celebrated the diverse experiences of students from around the world. She coached the St. Anne’s and Reynolds Girls Basketball teams and led the latter to a City Championship. When Jillian saw a problem, she fixed it. When she realized that young girls in Lititz did not have a basketball team, she started one. When her new arrival students wanted to continue learning English over the summer, Jillian convinced the school to open twice a week so she could teach them. A long-time resident of Lititz, PA, she was active in St. James Catholic Church where she ran the CCD program for several years. She was also president of the local AFS Chapter, welcoming students and their families from around the globe into her home and maintaining these connections throughout her lifetime. Upon retirement in 1998, Jillian moved with her husband to Rehoboth Beach where she was a member of Kings Creek Country Club and the Rehoboth Beach YMCA. She returned to her love of competitive swimming, winning numerous medals in the DE Senior Olympics and was a record-holder in her age group for the 500-yard freestyle. In her spare time, Jillian was an expert seamstress, quilter, upholsterer, and knitter and leaves behind many priceless hand-made heirlooms with her family and friends. She read voraciously and devoured books so quickly that those who did not witness it refused to believe she had finished the book that fast. Jillian will be remembered for her curiosity, compassion, fearlessness in a debate (with a smile at the end), her ability to laugh at herself and a huge heart. She faced her lengthy illness with courage, supported by her devoted husband, children, and the caring staff at Harbor Healthcare. In lieu of flowers, the family requests donations in Jillian’s name be made to the Association for Frontotemporal Degeneration at: https://www.theaftd.org/support-aftds-mission A Mass of Christian Burial will be held on Monday, August 19, 2019 at 11:00 AM at St. Edmond Catholic Church, 409 King Charles Avenue, Rehoboth Beach, DE 19971, where friends may visit beginning at 10:00 AM. Interment will be private. Please sign Jillian's online guestbook located on this site. FLORIST NOTE: PLEASE HAVE ALL FLORAL ARRANGEMENTS DELIVERED BY 3 PM, SUNDAY, AUGUST 18, 2019 TO PARSELL FUNERAL HOMES, LEWES, DE.

The family of Jillian A. Bradley created this Life Tributes page to make it easy to share your memories.

Send flowers to the Bradley family.