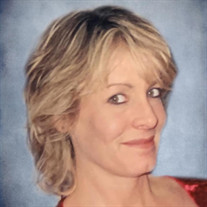 Jill Marie Shaw Abbott, "Jilly Bean", age 49 of Rehoboth Beach, DE, passed away on Friday, February 21, 2020. She was born on Sunday, January 24, 1971 in Wilmington, DE, daughter of Donald G. and Bonnie L. (Ahern) Shaw. A private Memorial Service was held on March 7, 2020 at Parsell Funeral Homes and Crematorium, Atkins-Lodge Chapel, Lewes, DE. Jill attended Baltz Elementary and Conrad Middle Schools. She graduated from Wilmington High School, Class of 1989. After a year of attending Delaware Technical College, Jill decided to change course. She always had a desire to become a hairstylist, so she began training at Schilling and Douglas School of Cosmetology. Her training was long with no breaks, but she had finally realized her dream of becoming a hairstylist. While working at her trade, she also worked at the Smooth Tuna, then at Rossi's in Little Italy as a waitress, bartender, and hostess. Jill made so many friends and everyone loved her. Jill eventually opened her own salon, Sharp Hair Design Studio, located on Kirkwood Highway in Elsmere, DE. Jill loved traveling, going to many Caribbean, Mexico, California, and Florida destinations. She was certified in scuba diving at Key Largo, FL. Jill began living in Rehoboth Beach, DE in 2019, which is where she spent her young teenage summers working with her sisters at Charlie's Produce Stand by the canal bridge and then later summers at Candy Kitchen. Jill was preceded in death by her infant triplets, son, Tristan, and daughters, Cassidy and Kayla Abbott, in September of 1999. They were her Little Angels. Jill was also preceded in death by her most beloved maternal grandparents, William "Bud" and Bernice "Bernie" Ahern; and her paternal grandparents, Claudius and Mary Anna Shaw, of Muncie, IN. Jill is survived by her daughters, Melia and Gianna Abbott who, as Jill always said, were her greatest gifts. She loved them dearly. She is also survived by her former husband, Richard Abbott. Jill is survived by her parents, Donald and Bonnie Shaw. Surviving also are her sisters, Kim and Gwen and their families; Kimberly and Chris Rollings and Alex (Liz), Matt and Wil; and Gwendolyn and Bill Mitchell and Billy and Courtney (Sway Lebron). Jill loved her niece and nephews and adored her little great nieces, Juliana and Makenna Lebron. Jill loved all animals, especially her pets: Hunter, the bulldog; Max, the Siamese; Midgie, the Pug; Winston and Peaches, the lovebirds; and years later, Dallas, the rescue dog. We love you, Jilly Bean, with all our hearts and miss you so very much. Please sign the virtual guestbook located on the tribute page.

The family of Jill Marie Abbott created this Life Tributes page to make it easy to share your memories.

Send flowers to the Abbott family.