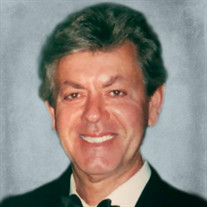 Jeremiah John Collins III, age 84 of Lewes, DE since 1991and formerly of Camden, NJ, passed away peacefully on Tuesday, October 6, 2020 at his home. He was born on May 15, 1936 in Camden, NJ, son of the late Jeremiah John Collins II and Nettie Ann Collins. Jerry was a 1954 graduate of Woodrow Wilson High School in Camden, NJ. He worked in car sales for over 40 years in New Jersey and Delaware. His interests were many and varied. Jerry enjoyed the casinos and racetracks, but tennis especially was a lifelong pleasure and passion. Jerry was a self-taught tennis player, traveling far and wide to compete. He ranked # 1 in The Middle States for Delaware in his age group and taught in New Jersey and in Delaware at the Plantations in Lewes and at Sea Colony in Bethany Beach. Jerry played all over the country at various clubs and in tournaments. He was an avid traveler and particularly enjoyed the Bahama trips with his wife, daughter, and grandchildren. Above all, Mr. Collins cherished time with those he held most dear; especially his adored wife, daughter, and grandchildren. He was a loving and devoted husband, father, grandfather, brother, and friend who will be genuinely missed by everyone who had the opportunity to know him. In addition to his parents, Mr. Collins was preceded in death by his sister, Mary Collins. He is survived by his beloved wife, Lynda M. (Panarello) Collins; his daughter, Lisa Aboud; his grandchildren: Lena, Gianna, Nicolas, and Isabel Aboud; and his sister, Annette Collins, all of Delaware; and his brother, Timothy Collins of Colorado. Our family would like to express our deepest appreciation to Beebe Medical Center and Delaware Hospice for the outstanding care Jerry received during his final months. Services are private. In lieu of flowers, the family requests contributions in Mr. Collins' memory to Beebe Medical Foundation, 902 Savannah Road, Lewes, DE 19958, or Delaware Hospice, 100 Patriots Way, Milford, DE 19963. Please sign the online guestbook located on the tribute page.

The family of Jeremiah John Collins III created this Life Tributes page to make it easy to share your memories.

Send flowers to the Collins family.