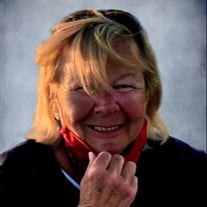 JEAN PATRICIA SOPHIA KEATS Jean Patricia Sophia Keats died April 28, in Lewes after a long, courageous battle against breast cancer. Jean was born in Munich, Germany on October 5, 1947, to Julius and Gerda (Bullacher) Hagelberg. Her father was serving in the U. S. Army. Jean came to the United States with her mother and father in 1949. Jean was raised in Newton, New Jersey. Because of her deep caring for others, she was determined to become a nurse. She received her R. N. degree, having taken a 5 year leave to raise her son, Mark, until he entered elementary school. During that time and after, while finishing school, she worked in doctors' offices and as a transcriptionist. After obtaining her degree, Jean worked as a staff nurse at Morristown, New Jersey, Memorial Hospital. She later held positions at that hospital in Risk Management and as Patient Representative. From 2000 to 2008 she managed her husband's medical practice. Both she and Dr. Keats retired in 2008 and moved to Lewes, Delaware in 2009. Jean was predeceased by her mother, Gerda. She is survived by her husband, Philip Keats; her father, Julius Hagelberg; her sister Susan Jones (Charles); her brother, David Hagelberg; her son, Mark Slater (Jennifer); her grandchildren, Christopher and Allison Slater; her step-children, Daniel Keats (Michelle); Matthew Keats (Emily);. Andrew Keats; and Sandra Keats. Also, her step-grandchildren, Jonathan, Maya, Gabriel, Madison, Ava, and Cole Keats. A memorial service will be held at 10 AM, Friday, May 13, 2022 at St Peter's Episcopal Church, 2nd Street, Lewes, DE. Private graveside services will follow for the family at St. Peters Cemetery-Pilottown. In lieu of flowers, donations may be made to Tunnell Cancer Center, c/o Beebe Medical Foundation, 902 Savannah Road, Lewes, DE 19958 or to Accent Hospice. Please sign the virtual guestbook located on the tribute page. FLORIST NOTE: PLEASE DELIVER ALL ARRANGEMENTS BY 3:00 PM ON THURSDAY, MAY 12, 2022 AT OUR LEWES LOCATION.

The family of Jean Patricia Sophia Keats created this Life Tributes page to make it easy to share your memories.

Send flowers to the Keats family.