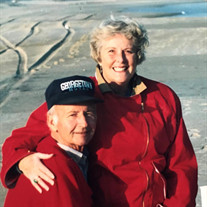 Jayne Willey Smith, 91, of Lewes, DE, passed peacefully holding her daughter's hand on Friday, April 9, 2021, at Atlantic Shores Rehabilitation and Health Center, in Millsboro, DE after a brief stay. She was born on June 23, 1929 in Wilmington, DE, daughter of the late Frank Joseph and Kathryn (Hurlock) Willey. Jayne was raised in Bridgeville, DE, which she regarded as idyllic, to a family descended from Delmarva settlers. Family roots ran deep in Sussex County. Jayne was valedictorian of her Bridgeville High School class and met her beloved husband, Charles Warner Smith Jr., at the University of Delaware, where he quarterbacked the 1949 championship football team. Jayne studied theatre and went on to act and model professionally, participating in local and professional productions in every area in which they lived, as they relocated in corporate life. She enjoyed most the years spent in Arden, DE, starring in many productions, as well as television commercials and print modeling. Jayne also toured with the National Humanities Series in the 1970s, bringing the arts to underserved areas around the country. Very recently, Jayne’s family was surprised and amused to find that an old modeling photo was being used in a line of fun kitchen accessories, and her image appears on aprons, mugs, magnets, and the like. During the birth of her second child, complications arose, and Jayne experienced a significant Near-Death Experience which led her on a path of spiritual exploration for the rest of her life. The experience was unique for a woman brought up in St. Mary’s Episcopal Church, and lead in the second half of her life to speaking around the country to spread her message of love and eternal life to many. Jayne’s experience contributed to research in the field and was featured in books and film on the subject, in addition to many news programs and the Oprah Winfrey show. She also served for many years on the board of the International Association for Near Death Studies. After the death of her husband, Jayne eventually retired to join lifelong friends in her favorite place, Lewes, where regardless of current home state, the family returned every summer. Jayne continued to contribute to the NDE community, lecturing at churches, medical facilities, and community forums when asked to share her message, and volunteered at Beebe Hospital for many years in their Alternative Medicine department with her dear friend Cheyenne Luzader. The healing group coordinated by Cheyenne was an important part of her life. Jayne’s final years in Lewes were immeasurably enhanced by her dear friends, Joan Thompson and Hazel Brittingham. They were a dynamic trio involved in community life and lucky to have friends everywhere they went. Jayne considered herself very fortunate to have had wonderful parents in Kathryn and F. Joseph Willey, and to have found the love of her life in Charles. (Tick). Jayne adored her daughters and grand and great-grandchildren and believed above all that “The Truth of Truths is Love.” Jayne was predeceased by her husband and beloved daughter, Cynthia McKee Smith. She is survived by her daughters: Deborah Smith Hengemuhle (William) of Hilton Head, SC, Julia Allen Smith of Milton; her son-in-law, Anthony Ciaccio of North Wales, PA; and her grandchildren: Martin Mulligan, William Hengemuhle, Kate Vincze, and Tyler Smith Morris; and four delightful great-grandchildren. Memorial plans are to be determined due to the ongoing pandemic. Jayne will be buried with her husband and many past generations of her family in the Bridgeville Cemetery. Please sign the virtual guestbook located on the tribute page.

Jayne Willey Smith, 91, of Lewes, DE, passed peacefully holding her daughter's hand on Friday, April 9, 2021, at Atlantic Shores Rehabilitation and Health Center, in Millsboro, DE after a brief stay. She was born on June 23, 1929 in Wilmington,... View Obituary & Service Information

The family of Jayne Willey Smith created this Life Tributes page to make it easy to share your memories.

Send flowers to the Smith family.