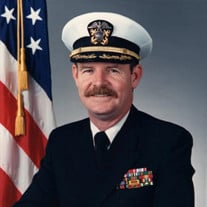 Jarrett Hunter Crowley II Intelligence Expert Captain Jarrett Hunter Crowley II, U.S. Navy (retired), 78, passed away peacefully in his home on Sunday, December 5, 2021, after a year-long battle with cancer. Mr. Crowley was born in Waynesboro, VA to the late Jarrett Hunter and Mary F. (Dameron) Crowley. After he graduated West Virginia University in June 1966 he began his 31-year career in the Navy. He served in Vietnam and the Mediterranean, specializing in Operational Intelligence in Naval Aviation Attack Squadrons, aircraft carriers, and as a staff intelligence officer in operations and planning. He went on to graduate from the Naval War College in Newport, RI (1979) and the Armed Forces Staff College in Joint Military Operations (1983). He was designated as Joint Staff Officer for the Defense Intelligence Agency in Intel Support Systems and as Director of Programs and Policy at the National Security Agency. He retired with the rank of Captain in 1997. He went on to a stellar career in Intelligence at the Johns Hopkins University Applied Physics Lab until retirement in 2017. Mr. Crowley had a deep appreciation for excellent food, wine, and good conversation, all of which were part of his life in retirement in Rehoboth Beach, DE. He was a talented chef and an extraordinary host, with an uncanny ability to know just what his guests needed or wanted, all the while making it all seem effortless. He was an enthusiast of art, music, and Broadway theatre. His career in the Navy kindled an enduring curiosity for and love of travel, and as he and his friends wandered the globe, he often brought paintings home and in time created an impressive art collection. Over the decades he was devoted to his many Scottish terriers, and they are remembered in paintings in the art collection. In retirement he drew upon his lifetime of travel adventures and created the Crowley Global Travel Agency as part of the Avoya Network, helping others in their travel adventures. Mr. Crowley was a loyal and loving husband, son, brother, and uncle. He had a wicked sense of humor. He was an incredibly gifted Mr. Fix It and had a quiet way of showing up just when his helping hand was needed. He will be deeply missed by all who were lucky enough to know him. He is survived by his spouse, James Lee Kemp of Rehoboth Beach, DE.; his sister, Pebble Dunn of West Palm Beach, FL; and three nephews: John Jay Williams, Raymond Hunter Williams, and Jerry Dunn, all of West Palm Beach, FL. A Celebration of Life Ceremony will be held in Rehoboth Beach, DE in early 2022, to be followed at a later date by entombment with full military honors at Arlington National Cemetery. In lieu of flowers, the family suggest contributions in Mr. Crowley’s memory to the St. Jude Children’s Hospital, https://www.stjude.org/give/memorials-and-dedications.html. Please sign the virtual guestbook located on the tribute page.

The family of Jarrett Hunter Crowley II created this Life Tributes page to make it easy to share your memories.

Send flowers to the Crowley family.