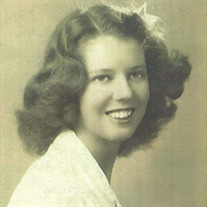 Jane Lynam McCurry, age 99, of Rehoboth Beach, DE, passed away peacefully on Saturday, May 15, 2021, two weeks shy of her 100th birthday. She was born on June 1, 1921 in Newport, DE, daughter of the late Hyland B. and Margaret (Fox) Lynam. Jane graduated from Conrad High School in Newport in 1939. Her education continued at the University of Delaware from where she graduated in 1943 with a degree in Education. During her senior year at Delaware, she met her future husband, the late Robert B. "Buck" McCurry (1923-2006). Jane taught elementary school in Newport after graduation and Buck left school to enlist in the Army Air Corp during World War II. They married in 1945. After the war, Jane and Buck moved to East Lansing, MI where Buck finished his education at Michigan State University. Jane continued to teach elementary school in East Lansing while attending classes at MSU. She earned a Master of Science in Education Degree from the university. Jane moved with her husband more times than most. During Buck's years in the service and with his job, they lived in many different areas of this country. They traveled far and wide to many parts of the world with his job as well. She saw places and had experiences she never imagined would happen to a girl growing up in Newport during the Depression. Everywhere she made a home, she continued to pursue her interests in art, bridge, and gardening. Her interest in art included embroidery, needlework, sculpting and oil painting. Many family and friends will remember her through her paintings which they were fortunate enough to receive. During the Depression, Jane and her family would spend summers in Rehoboth Beach. Her parents ran a rooming house on the Boardwalk and Baltimore Avenue. This continued until the house was destroyed in the storm of 1962. Because of her connection to Rehoboth Beach, wherever they lived, Rehoboth Beach was where Jane and Buck returned in the summer with their family. They built a summer home in Henlopen Acres in 1969 which became a welcome retreat for their children and grandchildren. In 1995 they moved permanently to Rehoboth Beach to enjoy their retirement years. They were members of the Rehoboth Beach Country Club, the Henlopen Acres Beach Club and Westminster Presbyterian Church. After Buck's death in 2006, Jane moved to Cadbury at Lewes (now The Moorings at Lewes) where she lived until her death. In addition to her parents, Jane was preceded in death by her five siblings: Mrs. Walter L. Tindall (Bobby), Mrs. Frederick A. Benoit (Eleanor), Hyland B. "Bill" Lynam, Jr. (Marian), Thornton G. Lynam and Richard F. Lynam (Anne). She is survived by her two daughters: Jody McCurry Burton and Meg McCurry Rapp, both of Rehoboth Beach; her four much loved grandchildren: Stephen H. Burton (Ohy) of Redondo Beach, CA, Robert M. Burton (Barbara) of Cincinnati, OH, Mrs. Richard W. Browne (Maggie) of Hannover, Germany, and Mrs. R. Michael Gill (Candace) of Baltimore, MD; her five much adored great-grandchildren: Robert M. "Buck" Burton, Charles B. "Brodey" Burton, and Briellie M. Burton of Cincinnati, OH; Daragh W. Browne and Cillian James Browne of Hannover, Germany; her sister-in-law, Anne Toppin Lynam and many nieces and nephews. A funeral service will be held on Saturday, May 22, 2021 at 11:00 AM, at Parsell Funeral Homes & Crematorium, Atkins-Lodge Chapel, 16961 Kings Highway, Lewes, DE, where friends may visit beginning at 10:00 AM. Interment to follow the service at All Saints Cemetery, 20274 Beaver Dam Rd., Harbeson, DE. Due to the ongoing COVID-19 pandemic, social distancing protocols must be observed, and masks must be worn by everyone participating in any aspect of the service. In lieu of flowers, Jane requested that a random act of kindness be performed in her memory. The family also suggests contributions may be made in Jane's memory to the Beebe Medical Foundation, 902 Savannah Rd., Lewes, DE 19958 or beebemedicalfoundation.org. Please sign the virtual guestbook located on the tribute page.

Jane Lynam McCurry, age 99, of Rehoboth Beach, DE, passed away peacefully on Saturday, May 15, 2021, two weeks shy of her 100th birthday. She was born on June 1, 1921 in Newport, DE, daughter of the late Hyland B. and Margaret (Fox) Lynam. Jane... View Obituary & Service Information

The family of Jane L. McCurry created this Life Tributes page to make it easy to share your memories.

Send flowers to the McCurry family.