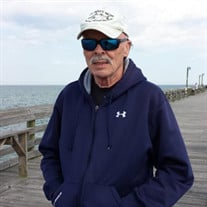 James H. Thrift, Jr. (Jim), of Ocean View, DE passed away at his home on December 21, 2021 surrounded by his family. Jim was born on December 13, 1945, in Washington, DC to James H. Thrift, Sr. and Theresa Gertrude Thrift. At the time of his death Jim had been married to his beloved wife, M. Suzanne Thrift, for 47 years. In addition to his wife, Jim leaves behind two sons whom he loved very much, James H. Thrift, III (Kelly) and Daniel C. Thrift; he also leaves behind two grandchildren who he adored, J. Nicholas Thrift (Brittney) and Jennifer L. Thrift; a brother Michael A. Thrift (Kathy), a sister, Mary Thrift Bush (Jerry) and many cousins. He was preceded in death by his brother, John C. Thrift. Jim grew up in Washington DC and graduated in 1964 from Surrattsville Senior High School in Surrattsville MD. He also completed coursework at the American University in Washington, DC. Following high school Jim was employed as a Mechanic II Class at Potomac Electric Power Company (PEPCO) where he learned many skills including electric line installation, carpentry, sheet metal work, small machine repair and mechanical engraving. While at PEPCO, and throughout his life, Jim was a quick and inquisitive learner and rarely encountered any electrical or mechanical issue he couldn’t solve. Jim was often sought out by his family and friends for his expertise in a variety of fields and because he was always willing to lend a hand. After leaving PEPCO Jim became a Metropolitan Police Officer in Washington, DC, working on several teams, including the Special Operations Division, Tactical Branch. Jim later transferred to the Executive Protective Service of the United States Secret Service (USSS) which later became known as the Uniform Division of the USSS. He was initially assigned to the White House and continued working under several Presidential Administrations while with the USSS. Later, Jim became a respected Firearms Instructor, expert marksman, and a member of the USSS competitive pistol team. Jim retired from his position as a Firearms Instructor in 1989 and immediately returned to the USSS as a Computer Specialist. He retired from that position in 2014 when he and his wife moved to Ocean View, DE. Jim was a dog lover and at one point in his life he and his wife raised English Setters. He was an avid outdoorsman who thoroughly enjoyed fishing, hunting, especially upland game, and boating. He had a special love and respect for the Chesapeake Bay where he and his family spent countless hours fishing and crabbing. Jim owned several boats throughout his life. He also enjoyed spending time in his backyard and could often be found landscaping, taking time to enjoy the local wildlife, or making delicious BBQ in his smoker. He was a loving husband who adored his wife and a caring father who taught his sons so much, including an equal love of the outdoors. Jim will be greatly missed by his family and friends, who will remember him most for his kindness, thoughtfulness, generosity and great sense of humor. Funeral arrangements will be private. Jim’s final care has been entrusted to Parsell Funeral Homes and Crematorium, Clarksville Chapel, Ocean View , DE. The family has requested that in lieu of flowers, if anyone wishes to acknowledge and remember Jim, they may do so by making a donation in Jim’s memory to the Chesapeake Bay Foundation, at https://www.cbf.org/index.html. Please sign the virtual guestbook located on the tribute page.

James H. Thrift, Jr. (Jim), of Ocean View, DE passed away at his home on December 21, 2021 surrounded by his family. Jim was born on December 13, 1945, in Washington, DC to James H. Thrift, Sr. and Theresa Gertrude Thrift. At the time of his... View Obituary & Service Information

The family of James Harold Thrift Jr. created this Life Tributes page to make it easy to share your memories.

Send flowers to the Thrift family.