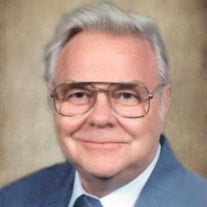 FLORIST NOTE: PLEASE DELIVER ALL ARRANGEMENTS BY 10 AM THURSDAY, DECEMBER 17, 2020 TO OUR BRIDGEVILLE LOCATION. James Michael Nagel, age 90 of Bridgeville, DE, passed away peacefully on Thursday, December 10, 2020 at his home surrounded by family. He was born in Baltimore, MD on March 23, 1930, son of the late John H. and Margaret Nagel. Mr. Nagel had an unparalled work ethic, dedicating many years in the shipyard of Bethlehem Steel and General Motors. He retired from General Motors after 25 loyal years of service. He moved from Baltimore to Pasadena, MD with his wife Mary to raise their 7 daughters, but he never lost his love of Baltimore. He enjoyed watching the Orioles and would smile whenever told he looked like Earl Weaver, a well known Orioles Baseball Manager. After retirement, Mr. Nagel enjoyed daily walks at Fort McHenry, in Baltimore. He took many vacations and cruises with his wife and family, became an expert model shipbuilder, and took pleasure in sharing his boats with family and friends. He moved to Bridgeville, DE in 2003 to be close to his daughter and devoted caregiver, Melody. He never had an empty home thanks to the love of his loyal canine companions, Sandy, Spritzel, Dixie, and Lucy. Above all, Mr. Nagel cherished time spent with those he held most dear, particularly, his adored grandchildren. He was a loving and devoted husband, father, grandfather, and friend who will be deeply missed by all who knew him. In addition to his parents, Mr. Nagel was preceded in death by his beloved wife, Mary (Huber) Nagel; his daughters: Terri Lynn Walczak and Tina Marie Sherman; and his grandson, Christopher Winters. He is survived by his daughters: Sharon Fink (John), Eleanor Wagner (Steve), Mary Bo Delaney (Ed), Paula Sherman, and Melody McCleaf (Brian); his grandchildren: John Fink, Jamie Fink, Brandy Walczak, Brittney Walczak, Gregory Walczak, Lee Payne, Matthew Wagner, Rebecca Wagner, Victoria Wagner, Kyle Gebhardt, Aubrey Gebhardt, and Jessica Wall; his 19 great-grandchildren; and his 3 great-great-grandchildren. The family would like to extend their heartfelt gratitude to Mr. Nagel's devoted caregivers, Tysha Cannon, Angel Stratton, and Bre Stratton, who provided exemplary love and care, and became family over the past years. Services will be private. In lieu of flowers, the family requests contributions in Mr. Nagel's memory to Laurel Nazarene Church, 100 Walnut Drive, Laurel, DE 19956. Please sign the online guestbook located on the tribute page.

FLORIST NOTE: PLEASE DELIVER ALL ARRANGEMENTS BY 10 AM THURSDAY, DECEMBER 17, 2020 TO OUR BRIDGEVILLE LOCATION. James Michael Nagel, age 90 of Bridgeville, DE, passed away peacefully on Thursday, December 10, 2020 at his home surrounded by... View Obituary & Service Information

The family of James Michael Nagel created this Life Tributes page to make it easy to share your memories.

FLORIST NOTE: PLEASE DELIVER ALL ARRANGEMENTS BY 10 AM THURSDAY,...

Send flowers to the Nagel family.