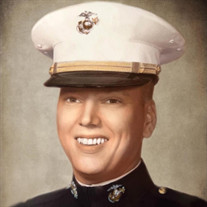 Memorial Services for Jim have now been scheduled for Saturday April 16, 2022 at 11 AM at the Bethel United Methodist Church, w 4th street, Lewes, DE where friends may visit beginning at 10 AM. Military Honors will be rendered at the conclusion of the services. LIVE STREAM OF SERVICES AVAILABLE BY GOING TO THE FOLLOWING LINK- https://youtu.be/cjxdMiu_c9Y James H. Bastian Jr., Marine Corps Veteran James “Jim” Bastian of Lewes, DE, passed away peacefully while surrounded by his family on Monday, January 3, 2022, due to complications from a fall. He was born in Dover, DE in 1940 to the late Helen and James H. Bastian Sr. Jim led a full life as a Major in the United States Marine Corps, a local business owner, an avid outdoorsman, and a community servant, but his highest priority was always spending time with his family. A graduate of Dover High School (Class of 1958), Jim earned a bachelor of science degree from West Virginia Wesleyan College in 1962. The following year he married the love of his life, Charlotte Adkins, while serving active duty in the Marine Corps, at Camp Lejeune, NC. After serving the country he loved dearly for four years active duty, he continued his service for six more years in the reserves. Jim worked as a supervisor for Leeds Luggage before opening Bastian Auto Parts in Lewes in 1971. Charlotte and Jim operated that business for 25 years. As a wildlife enthusiast, Jim managed his Maryland property with a sharp focus on preserving and propagating a healthy environment for the vast array of birds, deer, and other wildlife that called the parcel of land home. Jim taught his entire family a profound appreciation for the beauty of Lewes Beach. He never missed an opportunity to fish, swim, walk along the seashore, pull the seining net, or explore the sandbar with his grandchildren. For almost three decades Jim proudly served on the Lewes Planning Commission, with over 20 years as its chairman. He truly loved Lewes and enjoyed working with colleagues to maintain and preserve its historic and unique integrity. Jim also served on numerous committees for Bethel United Methodist Church over many years. Jim loved playing football, and ran the Make-A-Wish Triathlon and several Marine Corps Marathons. But no matter what his children and grandchildren’s interests were, he was always the proudest fan at any of their sporting events or performances. Jim is lovingly survived by his wife of 58 years, Charlotte Bastian; his children: Cathy and her husband, Andy McCollough of McLean, VA; Christine and her husband, Dave Gillan of Lewes; and Jay and his wife, Jennifer of Burbank, CA. “Pop Pop” was adored by his ten grandchildren: Taylor and her husband, Nate Marketich, Grant and Ross Gillan, Summer, Easton, Rachel and Vaughn McCollough, and Molly, Jake, and Quint Bastian. Jim is also survived by his brother-in-law James and his wife, Karin Adkins of Harbeson and his aunt and uncle, Bette and James Taylor of Salisbury; as well as his nephews: Drew and Jamin Adkins; and niece, Kaitlyn Sepesy. Friends were an important part of Jim’s life, and he always had a smile to share and a sincere interest in their lives. He greatly valued his lifelong friendships, which included Carolie and Bill Holden, Carole and Ted Palmer, Barbara and Donnie Wiggins, Marlys Cowan, Ann B. Moore, fellow Marine Thomas Hinkle, and the Young family. In lieu of flowers, the family suggests memorial contributions to Bethel United Methodist Church, 129 West 4th Street, Lewes, DE. Please sign Jim's virtual guestbook located on the tribute page.

Memorial Services for Jim have now been scheduled for Saturday April 16, 2022 at 11 AM at the Bethel United Methodist Church, w 4th street, Lewes, DE where friends may visit beginning at 10 AM. Military Honors will be rendered at the conclusion... View Obituary & Service Information

The family of James Hughes Bastian Jr. created this Life Tributes page to make it easy to share your memories.

Memorial Services for Jim have now been scheduled for Saturday...

Send flowers to the Bastian family.