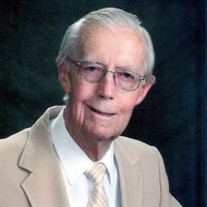 Henry James "Hank" Parks, age 91 of Millsboro, DE and formerly of Cherry Hill, NJ, passed away at home in the care of hospice, on Thursday, May 13, 2021 after a long battle with Alzheimer’s Dementia. He was born on July 15, 1929 in Ocean Grove, NJ, son of the late John Aloysius and Florence Fern (Beresford) Parks. Mr. Parks was a graduate of North Arlington High School in New Jersey. He was also a member of New Jersey National Guard between 1948-1956. On March 3, 1951, he married the love of his life, Elizabeth "Betty" Bain Elliot in Newark New Jersey. Mr. Parks was very skilled as an interior designer who made draperies and slipcovers. He enjoyed a 60-year career and was the sole proprietor of his business. Mr. Parks was an avid surfer and snow skier, but his passion was the shore. He taught himself how to surf, and taught his 2 sons and 3 nephews, as well. A Christian man of faith, he did set designs with his wife, Betty for vacation Bible school. Above all, he enjoyed time spent with those he held most dear. Mr. Parks was a loving and devoted husband, father, grandfather, great-grandfather, and friend who will be deeply missed by all who knew him. Mr. Parks was predeceased by his wife of 61 years, Elizabeth Bain Elliot; and his brother, Jack Parks. He is survived by his children: H. David Parks (Lee) of Millsboro, DE; Daniel Parks (Kara) of Augusta, ME; Susan Parks of Winston Salem, NC, and Nancy Parks of Cherry Hill, NJ; his grandchildren: Christopher Barrie (Korin), Matthew Parks (Amanda), Jonathan Parks (Molly), Collin, Maci and Fiona; his great-grandchildren: Miles, Molly, Evelyn, Bodhi, Brae, Zoey, Sloane, and Jack; his loving sister-in-law, Ann Parks of Tequesta, FL; and his several nephews and their families. Funeral services will be held at a later date at his home church, Trinity Presbyterian Church, 499 Marlton Pike East, Cherry Hill, NJ 08034. In lieu of flowers, the family suggest contributions in Mr. Park's memory to the Delaware Hospice, 100 Patriots Way, Milford, DE 19963, who provided wonderful, compassionate care and were our blessing these last 10 months. Please visit Mr. Parks’ Life Memorial Webpage and sign his virtual guestbook at www.parsellfuneralhomes.com.

The family of Henry James Parks created this Life Tributes page to make it easy to share your memories.

Send flowers to the Parks family.