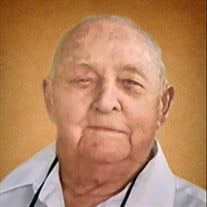 Harry Charles Woodruff "Woody", age 94 of Bethany Beach, DE, passed on peacefully, surrounded by family, friends, and caregivers, on Saturday, June 27, 2020 at his home. He was born in Pawlet, VT, on August 27, 1925, son of the late Harrison and Pauline Woodruff. Harry loved his home and spend the last months sitting on the porch and watching his favorite magnolia tree, which was blooming as he passed. He lived in South Bethany, Delaware for the last 40 years with his devoted wife, Alice Tanner Woodruff. Harry attended Granville High School and Rensselaer Polytechnic Institute. He joined the Navy to fly! During World War II he was a pilot on an aircraft carrier stationed in the Mediterranean. Harry and Alice were married in North Granville, New York on August 20, 1948. After the war, he and Alice bought the Herman and Jessie Smith farm in Pawlet and built a dairy business over the next ten years. They had two children, Chuck and Cindy, while living on the farm. Alice continued her career as a registered nurse. In 1958 Harry was injured and changed careers to become an air traffic controller. The family moved to Ayer, Massachusetts, where he worked at Hanscom Field in Bedford. In 1962 he applied to work at Dulles International Airport in Herndon, Virginia, where he became an opening day controller. The family lived in Herndon for many years. Their first grandson, Chris, was a frequent visitor to their home. Harry and Alice retired to South Bethany, Delaware in 1979. They built their own home on a canal near the ocean. Harry kept busy as a member of the South Bethany Town Council and the Mayor from 1989-1990. They entertained friends and family from all over the world. Alice passed on September 30, 2014. Harry loved hunting, boating, and fishing and especially entertaining guests with his jokes. He was loved by many and will be deeply missed by all who knew him. In addition to his wife and parents, Harry was preceded in death by his sister, Sharon. He is survived by his son, Harry Charles Woodruff II (Susan Quinn) of Clifton, VA; his daughter, with whom he lived, Cynthia Woodruff of South Bethany Beach, DE; his 4 grandchildren; his 5 great-grandchildren; his one great-great-grandchild; his brother, Paul Woodruff (Geraldine) of Wells, VT; and his niece, Sharlene. Services will be held on Friday, July 3, 2020 in Granville, NY, with burial at Mettowee Valley Cemetery in Pawlet, VT. In lieu of flowers, the family suggests contributions in Harry's memory to Ocean View Presbyterian Church, 67 Central Avenue, Ocean View, DE 19970, Compassionate Care Hospice, 20165 Office Circle, Georgetown, DE 19947, or Pawlet Public Library, 141 School Street, Pawlet, VT 05761. Please sign the online guestbook located on the tribute page.

Harry Charles Woodruff "Woody", age 94 of Bethany Beach, DE, passed on peacefully, surrounded by family, friends, and caregivers, on Saturday, June 27, 2020 at his home. He was born in Pawlet, VT, on August 27, 1925, son of the late Harrison... View Obituary & Service Information

The family of Harry Charles Woodruff created this Life Tributes page to make it easy to share your memories.

Send flowers to the Woodruff family.