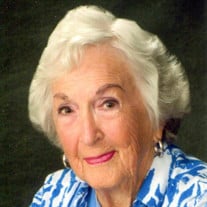 Hannah Ann Parsons Hickman, age 93 of Millville, DE, passed away peacefully in her sleep on the early morning of March 10, 2021. She was merely days shy of her 94th birthday. Hannah was born at home on March 13, 1927 in Parsonsburg, MD, daughter of the late Minos and Jennie Parsons. Hannah grew up in Ocean View, DE, where her parents owned a popular general store. She loved riding her bike to the beach and even made her own bathing suits out of feed sacks. During the second World War, she helped the war effort through the Junior Red Cross, where she learned to knit vests for servicemen. Hannah attended Lord Baltimore High School and in 1945, she graduated valedictorian of her class. While attending University of Delaware, she reconnected with Brice Hickman, a local rascal from her hometown of Ocean View. He had served in the navy during the war and was completing a degree through the G.I. bill. They fell madly in love and married in a civil ceremony in 1948. Hannah and Brice enjoyed many memorable evenings together jitterbug dancing at the Pier Club in Ocean City, MD. Shortly after, in 1949, Hannah completed her bachelor’s in science. After briefly living in Wilmington, the couple settled in Dover where they raised three daughters. Brice worked as Vice President of consumer credit at PNC bank, while Hannah put her sewing skills to use as a home economics teacher at Caesar Rodney Junior High School. Post-retirement, they split their time between Lake Wales, Florida and Bethany Beach, DE where they lived at The Tides, formerly a bed and breakfast owned by Brice’s mother. It was a street away from the beach and from the front porch you could watch the fireworks on the 4th of July. Hannah spent her retirement traveling across Europe, golfing, playing bridge with friends, and enjoying walks on the boardwalk. She and her husband were lifelong Methodists and active members of Mariner's Bethel Methodist Church. After 59 blissful years of marriage, Hannah lost Brice. She got through her grief with the company of her lifelong friends Melba Townsend and Ruth Davis and her pet cat. She later moved to a smaller home in Millville near her eldest daughter Janet Hickman, but still visited the Bethany Beach boardwalk for a stroll from time to time. In her final couple years, her granddaughter and namesake, Hannah Hetfield, was her frequent companion. Hannah Hickman will be remembered for her sparkling wit, her sweet and gentle spirit, her humility, and her unconditional love. She never complained or took life’s blessings for granted. She found happiness in the simple things: finding airplane contrails in the sky, having a bowl of ice cream after dinner, putting the final piece in a jigsaw puzzle, taking a warm nap in the sun, or just looking at the ocean. Hannah wrote the most thoughtful cards and gave the warmest hugs. She always smelled like Estée Lauder Beautiful. She loved classic Hollywood films, her favorite of which was Casablanca. She died doing one of her favorite things, getting some good sleep and hopefully having a fantastic dream about reuniting with her husband in heaven. She is survived by her daughters: Jan Hickman, Lynn Wood and Catherine “Kay” Hickman; her Fresh Air Fund daughter, Valerie Fagin; her grandchildren: Rachel Wood, Eric Wood, Hannah Hetfield and Ingrid Hetfield; her niece, Jean Steele; her nephews: Bob Parsons and Ted Parsons; and her beloved tuxedo cat, Fred Astaire Hickman. Services will be announced at a later date. In lieu of flowers, the family requests contributions in Hannah’s memory to Mariner's Bethel Methodist Church, 81 Central Avenue, Ocean View, DE 19967, or the Fresh Air Fund, 633 Third Avenue, 14th Floor, New York, NY 10017. Please sign the virtual guestbook located on the tribute page.

Hannah Ann Parsons Hickman, age 93 of Millville, DE, passed away peacefully in her sleep on the early morning of March 10, 2021. She was merely days shy of her 94th birthday. Hannah was born at home on March 13, 1927 in Parsonsburg, MD, daughter... View Obituary & Service Information

The family of Hannah P. Hickman created this Life Tributes page to make it easy to share your memories.

Send flowers to the Hickman family.