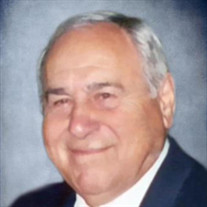 George Gabriel Graziano passed away peacefully on February 25, 2022, in Delaware. George was born on December 28, 1921, in Jersey City, New Jersey to his loving parents, Saverio and Catherine Graziano. He was predeceased by his wife Madeline; sister Tina Giannattasio; and brothers, Frank, and Joseph. He is survived by his sisters Anne Garrison and Florence Graziano. George grew up surrounded by an extended family – grandparents, aunts, and uncles in Jersey City. He often described his childhood years as idyllic, despite the times. His family gathered frequently, and as traditional Italian families do, they enjoyed their homemade wine, delicious food, and often joined together playing music. While working at Westinghouse, George met the love of his life, Mandy, to whom he was married for 68 years. An enlisted man, he proudly served in the U.S. Navy from 1943-1946, as an aircraft mechanic, serving a portion of his service in Pearl Harbor. As they married and settled in the suburbs, George owned a successful business for many decades and was admired by his loyal clientele. In the years that followed, they raised three daughters, who each married Irishmen whom George considered his sons, Judith and John O’Reilly of Little Egg Harbor, New Jersey, Susan and James O’Doherty of Lewes, Delaware, and Linda and George McGrory of North Haven Connecticut. His grandchildren and their spouses, George (Lori), James (Lindsey), Jason (Pilar), Christine (Eric), Alison and Caitlin (Drew) adored him and his special times with each of them during their childhoods, often including a trip to the ice cream parlor. Those cherished traditions continued as he was blessed with 9 great grandsons: Shane, Nicholas, Luke, Joseph, Dayton, Mason, Aidan, Milo, and Cole. After three decades of male births in our family, Goerge was thrilled at the birth of his 2 great granddaughters, Gisele, and Hailey. George was a “people person”; he enjoyed family times, entertaining, parties, in depth discussions, music, dancing, being at the beach, and always, great food. He also enjoyed reading and learning about history. He would fix just about anything and was always forming inventions and patent ideas…some as recent as last month. His philosophy of life was to maintain a physical, mental, and nutritional balance and as an early adopter on fitness, Jack LaLanne was often on the household TV. He recently reached the age of 100 years, and his family believes his formula for a life well lived was his strong faith, no matter how fast the world changed, accepting new ideas, an attitude of gratitude, a life focused on simple pleasures, and love…. always centered on family. “You’ll know the people that feed your soul because you’ll feel good after spending time with them.” Unknown A Mass of Christian Burial will be held at St. Catherine Church, Glen Rock, New Jersey on Saturday, April 2, 2022, at 10:30 AM. In lieu of flowers, contributions will be greatly appreciated to Homes for our Troops, 6 Main Street, Taunton, Massachusetts 02780 or www.hfotusa.org. Please sign the virtual guestbook located on the tribute page.

George Gabriel Graziano passed away peacefully on February 25, 2022, in Delaware. George was born on December 28, 1921, in Jersey City, New Jersey to his loving parents, Saverio and Catherine Graziano. He was predeceased by his wife Madeline;... View Obituary & Service Information

The family of George Gabriel Graziano created this Life Tributes page to make it easy to share your memories.

Send flowers to the Graziano family.