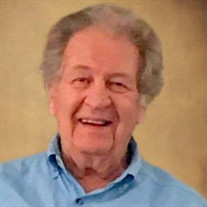 George Robert Clark, age 89 of Rehoboth Beach, DE, passed away peacefully on August 31, 2021, at home, surrounded by his loving family. He was born on February 25, 1932, to the late Calvin J. Clark and Mildred E. (Plitt) Clark, in the Baltimore neighborhood of Pigtown. George was raised in Brooklyn, MD, with a large extended family. He would wryly remark that he never had his own bed until he went into the Navy. George attended Ben Franklin Junior High School and graduated from Southern High School in 1951. He enlisted in the Navy in May 1951 and served four years during the Korean conflict. While attending a football game on leave, George met the love of his life, Therese Marie Smith. They went on a date before he reported back to base, and the rest is history. George and Therese wed on July 9, 1955, at St. Rose of Lima Church and made their home in Brooklyn, MD. They were married for 62 years before Therese’s passing. George was a master machinist. His favorite hobby was woodworking. He was a member of the Brooklyn Boosters Club and enjoyed traveling. George played and coached a variety of sports, including football, baseball, basketball, and boxing. He was an avid Baltimore Colts, Maryland Terrapins, and later, a Baltimore Ravens fan. George also enjoyed spending time with his five children and 13 grandchildren. He attended their sporting events and after school activities. George’s life became sweeter with the addition of 11 great grandchildren. He will be remembered for his sense of humor, encyclopedic memory, infectious laugh, love, support, and devotion to his family. He was truly iconic, and our world will be different without his presence. In addition to his wife and parents, George was also preceded in death by his sister, Audrey Sweiger; sister-in-law Mary Agnes Smith; brother-in-law Warren Bendix; and son-in-law David Cheslock. He is survived by his children: Claire Cheslock, Julie Leusner, Jeannine Clark, David Clark, and Therese Murphy; his grandchildren: Jennifer Cheslock (Glen), Elizabeth Ventura (Michael), Raquel Leusner-Jones (Justin), Carly Leusner (Greg), Aaron Cheslock (Nicole), Chelsea Leusner (Mike), Sam Cheslock (Katie), Megan Pfeffer (Daniel), Jacob Wishart, Kathryn Schmier, Andrew Murphy, Jamie Murphy (Jack), and Benjamin Wishart; his great grandchildren: Julia Ventura, Dalia Ventura, Lilia Ventura, Jackson Pfeffer, Maxton Pfeffer, Nora Pfeffer, Jack Cheslock, William Cheslock, Clark Leusner-Jones, Baby Leusner-Jones and Cyrus Quartapella; his sister, Patricia Bendix; his son-in-law, Steven Leusner; his daughter-in-law, Karen Murphy; his brother-in-law Jerry Smith (Claudia); his sister-in-law Lois Smith; and his devoted friend Maureen Hanold (Dave). His death has been a significant loss to us, to extended family members, and many close friends. “I’ve had a good run. I’ll see ya in the funny papers.” The family will hold a private ceremony at a future date with interment at Crownsville Veterans Cemetery. In lieu of flowers, contributions in George’s memory may be sent to Delaware Hospice, 100 Patriots Way, Milford, DE 19963, or any charity of choice. Please sign the virtual guestbook located on the tribute page.

George Robert Clark, age 89 of Rehoboth Beach, DE, passed away peacefully on August 31, 2021, at home, surrounded by his loving family. He was born on February 25, 1932, to the late Calvin J. Clark and Mildred E. (Plitt) Clark, in the Baltimore... View Obituary & Service Information

The family of George Robert Clark created this Life Tributes page to make it easy to share your memories.

Send flowers to the Clark family.