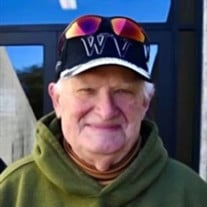 Dr. Gary David Wray, age 78 of Lewes, passed away peacefully late at night on February 3, 2022, surrounded by so much love, after a very short and very courageous battle with cancer. Gary was diagnosed with terminal cancer two weeks before Christmas... View Obituary & Service Information

The family of Dr. Gary David Wray created this Life Tributes page to make it easy to share your memories.

Send flowers to the Wray family.