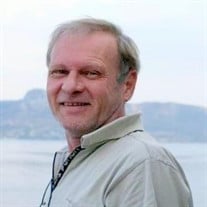 Captain Frank Roger Speigel, age 62 of Milton, DE, passed away peacefully on Monday, November 8, 2021, surrounded by his loving family. He was born on December 12, 1958, in Cape May Courthouse, NJ, son of Sandra R. Sharp and the late Frank C. Speigel. Frank attended elementary school in Wildwood, NJ and moved to Governors Island, NY for a short time. While living on Governors Island, he and his brother Rick would fish at every opportunity, providing many dinners for family and neighbors from a day’s catch. Frank descended from a long line of fisherman, and it was no surprise that he was an avid and successful mariner and celestial navigator. He worked commercial fishing all along the east coast, including on his grandfather’s boat, the “Thunderbird” and his father’s “Miss Chris” fleet. He moved to Alaska and was a king crab fisherman for a time, then traveled to Louisiana, where he began his career as a Merchant Marine. Frank traveled the world, calling home from Djibouti, Norway, Russia, Egypt, and countless other countries. During his travels, he met and married the love of his life, Hien, and they settled in Vung Tau, South Vietnam, where they raised their son, Erik. Frank’s time at sea was difficult for his family, but he always said the sea was his home. His children loved to hear stories of his adventures, particularly when he was kidnapped in Africa and talked his captors into taking him back to his hotel, or of one Christmas Eve in Russia, when he became the guest of honor at a mob gathering, for giving the boss’ son a chocolate bar. Frank retired in 2018 and the family moved stateside to Milton, DE. Even after retirement, his love of the sea remained, and he knew the best fishing spots from Cape May to Lewes. A legend until the end, Frank selflessly saved the lives of two people through the gift of organ donation. Frank is survived by his wife, Hien Truong Speigel of Milton, DE; his children: Jennifer Speigel (Thai Duong) of Abington, PA, Kristy Speigel Berringer (Michael) of Annapolis, MD, Meghann Speigel Kellaway (Chris) of Cape May, NJ, and Erik Speigel of Milton, DE; his grandchildren: Ella, Weston, Gavin, Damian, and Clark; his mother and stepfather, Sandra (Hitchner) and Richard “Sharpie” Sharp; his sister, Sherri Penuel (Mark) of Milton, DE; his brother, Rick Speigel of Vietnam; his former wife, Suzanne (Dietz) Speigel of Cape May, NJ; many nieces and nephews; and his extended family in Vietnam. The family would like to extend their heartfelt gratitude to the staff at Beebe Hospital, for their compassion, knowledge, and guidance. Services are private. In lieu of flowers, the family requests donations to the Margaret H. Rollins School of Nursing at Beebe Healthcare, 902 Savannah Road, Lewes, DE, or www.beebehealthcare.org/donate. Please sign the virtual guestbook located on the tribute page.

Captain Frank Roger Speigel, age 62 of Milton, DE, passed away peacefully on Monday, November 8, 2021, surrounded by his loving family. He was born on December 12, 1958, in Cape May Courthouse, NJ, son of Sandra R. Sharp and the late Frank... View Obituary & Service Information

The family of Captain Frank Roger Speigel created this Life Tributes page to make it easy to share your memories.

Send flowers to the Speigel family.