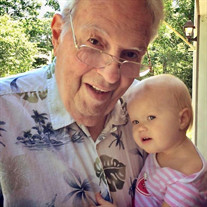 Eugene "Sonny" Meier of Lewes, DE, passed away at the age of 81 late in the evening on February 5, 2022. He is survived by his beloved wife of 55 years, Sharon Meier. He is also survived by his loving children: daughter, Carolynn Meier deTessieres... View Obituary & Service Information

The family of Eugene "Sonny" Adolf Meier created this Life Tributes page to make it easy to share your memories.

Eugene &quot;Sonny&quot; Meier of Lewes, DE, passed away at the age of...

Send flowers to the Meier family.