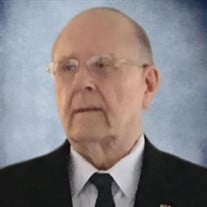 Retired Physician Dr. Eugene "Gene" Joseph Chap was born on September 1, 1936, in Olean, New York. He departed this life on January 11, 2022. His parents were Bennie J. Chap and Sophie Anna (Padlo) Chap, now deceased. Dr. Chap attended Transfiguration Roman Catholic School, School #7, and Olean High School before attending and graduating from St. Bonaventure University in 1957, graduating summa cum laude. Dr. Chap attended Marquette University School of Medicine in Milwaukee, Wisconsin (now The Medical College of Wisconsin- Milwaukee). He graduated in 1961 as a Medical Doctor. A Rotating Internship was done at St. Luke's Presbyterian Hospital (now Rush University Medical Center) from 1961 until 1962 in Chicago, Illinois. Dr. Chap then had three years of Internal Medicine Residency at Mercy Hospital in Buffalo, New York and the District of Columbia Hospital, Georgetown Division in Washington, D.C. Dr. Chap was employed at the Walter Reed Army Medical Center as a physician in the Outpatient Clinic from 1965 until 1966. He entered the U.S. Army while at Walter Reed in 1966 and was first assigned to Vietnam with the rank of Captain, after which he was assigned to the Kenner Army Hospital in Ft. Lee, Virginia until 1968. While in Vietnam he earned several medals, including The Combat Medics Badge and Commendation Medal. Following his honorable discharge in 1968, Dr. Chap began private practice in Washington, D.C. and continued for 15 years, before spending the next 15 years as a physician at The World Bank (International Bank for Reconstruction and Development) until 1998 when he retired. At The World Bank, Dr. Chap oversaw their Medical Service Department Clinic in Washington, D.C. and then served as Medical Director for a year's interim period. After retirement, he moved from his home in North Chevy Chase, Maryland to Rehoboth Beach, Delaware. Dr. Chap is survived by his life married partner Randolph C. Smith, of 48 years; along with a few family members the Padlo and Czaplicki families; and a host of cousins and dear friends. A Mass of Christian Burial will be held on Wednesday, May 11, 2022, at 11:00 AM, at St. Edmond Roman Catholic Church, 409 King Charles Avenue, Rehoboth Beach, DE, where friends may visit beginning at 10:00 AM. Please sign the virtual guestbook located on the tribute page. FLORIST NOTE: PLEASE DELIVER ALL ARRANGEMENTS BY 3:00 PM, TUESDAY, MAY 10, 2022 TO OUR LEWES LOCATION.

The family of Eugene "Gene" Joseph Chap M.D. created this Life Tributes page to make it easy to share your memories.

Send flowers to the Chap family.