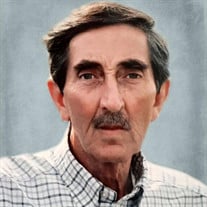 FLORIST NOTE: PLEASE DELIVER ALL ARRANGEMENTS BY 3PM WEDNESDAY, OCTOBER 16, 2019 TO OUR GEORGETOWN LOCATION. Elmer Wilson was 82 years old when he passed away on October 10, 2019 at Bayhealth Sussex Campus in Milford, DE. Mr. Wilson was the youngest son of the late Ernest and Grace Fleetwood Wilson of Coolspring, DE, where he grew up on a farm with his brother Barkley and his sister Shirley. After high school, Elmer continued to work on the farm and then went to work for the Sun Oil Company. Upon returning home, Elmer and his brother Barkley started a logging business and worked side by side for over 25 years. He later worked for DelDot for 15 years before finally retiring. In 1967, Elmer married his love Shelley Marriner and were married for 48 years until her passing in 2015. Elmer enjoyed many hobbies including gardening, fishing and was an avid hunter and loved his bird dogs. With all the friends he had, his true best friend was his brother Barkley. Elmer is survived by his devoted caretaker and sister, Shirley and brother-in-law Robert Givens; niece, Lisa Dorey; great nephews, William and Christopher Dorey; and great niece, Grace Dorey. Funeral Services will be held on Thursday, October 17, 2019 at 1:00 PM at the Parsell Funeral Homes & Crematorium, Dodd-Carey Chapel, 307 N. Bedford Street, Georgetown, DE 19947, where friends may call beginning at 12:00 PM. Interment will follow services at Harbeson Cemetery. Flowers are welcomed, however the family also suggests contributions in Mr. Wilson's name to the Harbeson United Methodist Church, PO Box 45, Milton, DE 19968. Please sign the online guestbook located on this site.

FLORIST NOTE: PLEASE DELIVER ALL ARRANGEMENTS BY 3PM WEDNESDAY, OCTOBER 16, 2019 TO OUR GEORGETOWN LOCATION. Elmer Wilson was 82 years old when he passed away on October 10, 2019 at Bayhealth Sussex Campus in Milford, DE. Mr. Wilson was the... View Obituary & Service Information

The family of Elmer Wilson created this Life Tributes page to make it easy to share your memories.

Send flowers to the Wilson family.