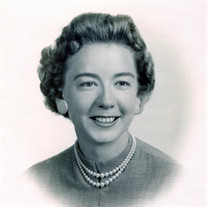 Ellen Marie Hays, age 97, peacefully entered eternal life on May 15, 2021 with her family by her side. She was born in Indianapolis, Indiana on July 20, 1923, the first of three children born to Delmer L. and Lottie Ruth (Edwards) Keith. Ellen married Major Charles Crecelius, of the Army Air Force on October 10, 1947. Charlie, the plane commander of a B-36 was killed during a routine combat training session on Monday, May 7, 1951. As per her husband’s wishes, Ellen returned to Indiana and graduated from Indiana University School of Nursing in Blooming, on March 12, 1954. She was hired as assistant director of nurses at Cincinnati General Hospital. In 1956, Ellen joined the Naval Reserves as a Lt and served in the US Naval Hospital, Newport Rhode Island. It was there that she met Commander Seymore T. Hays. It was a match made in Heaven. They were married just 5 weeks later, on August 30, 1957. From there, the couple was transferred to US Naval Base in Norfolk, VA, where Ellen continued her nursing career at the US Naval Hospital. In 1959, S.T. was transferred to London, England to work in Naval Intelligence. As she was expecting their first child, Tom, she resigned her Naval commission. As the wife of a Navy Commander who was often out to sea, Ellen devoted 10 years of her life to being the best wife and mother she could be. In 1967, she decided to return to her call of nursing at Cafritz Hospital in Washington, D.C. She was later hired by Columbia Hospital for Women in Washington, DC and finished her nursing career as Director of Nurses in 1980. Ellen and S.T. retired to Ocean Pines, MD, where she became very involved in First Presbyterian Church, Ocean City, MD. She served for many years as Deacon and Treasurer. In addition to her parents and first husband, Ellen was preceded in death by her beloved husband of 58 years, S. T. Hays; her brother, Harold Max Keith; and her sister, Mary Rose Keith. She is survived by her children: Seymore T. Hays, III (Rebecca), Steven Keith Hays (Claudia), Julie Marie Hays Beebe (David Randall), and Jeffrey Scott Hays (Laurie); and her grandchildren: Daniel Scott Beebe, Kaitlyn D. Hays, Keith Thomas Beebe, Emma Marie Hays, Matthew Steven Hays, Abigail Elizabeth Hays, Emily Christine Hays, Margaret Marie Hays, Julie Christine Hays, and Michael Steven Thomas Hays. Ellen will be remembered for her joy of life, her smiles and kind words to all she met. The family would like to extend their heartfelt gratitude to the staff and residents of The Woodlands of Ocean Pines for making Ellen’s last years relaxing and enjoyable. A funeral service will be held on Thursday, May 20, 2021 at 4:00 PM, 1st Presbyterian Church of Ocean City, 1301 Philadelphia Avenue, Ocean City, MD. Entombment will take place at a later date at the US Naval Academy Cemetery, Annapolis, MD. Social distancing must be observed and masks must be worn by everyone participating in or attending any aspect of the services. In lieu of flowers, the family requests donations In Ellen's memory to 1st Presbyterian Church of Ocean City, 1301 Philadelphia Avenue, Ocean City, MD 21842. Please sign the virtual guestbook located on the tribute page.

Ellen Marie Hays, age 97, peacefully entered eternal life on May 15, 2021 with her family by her side. She was born in Indianapolis, Indiana on July 20, 1923, the first of three children born to Delmer L. and Lottie Ruth (Edwards) Keith. Ellen... View Obituary & Service Information

The family of Ellen Marie Hays created this Life Tributes page to make it easy to share your memories.

Send flowers to the Hays family.