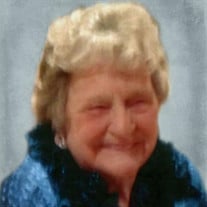 Mrs. Eleanor "Jane" Jones, age 91 of Millsboro, DE, passed away in the early morning hours of July 21, 2019 at Atlantic Shores nursing home in Millsboro, Delaware. She was born in Colora, MD on April 29, 1928, the only child of the late Dr. J. Paul Slaybaugh and Gertrude Lynch Slaybaugh. Jane's father was a life long educator and headmaster of West Nottingham Academy, an all boys boarding school, where Jane spent her formative years and attended high school there as the first and only girl. It was also there that Jane met and fell in love with her future husband, Henry (Walt)Jones, when he enrolled at the academy after coming home from WWII. Jane attended Dickinson College to study Psychology. After graduation she married Walt, and they moved to Wilmington, Delaware where Jane and Walt were both employed by the DuPont Company. Eventually the happy couple moved to the Rehoboth Beach area. Jane was co-counder of Midway Par 3 Golf Course in Lewes. She was one of the oldest members of Epworth United Methodist Church. Jane will be remembered for the graciousness of her heart and the warmth of her many knitted blankets. She was a loving and devoted mother, grandmother, great-grandmother, aunt, and friend who was loved by many and will be deeply missed by all who knew her. In addition of her parents, she was preceded in death by her husband, Walt Jones in 2010; and her niece, Lynn Jones Daue of Maryland. She is survived by her children: Paul Jones (Ceil), Rick Jones (Joan), and Barbara Moore (Mark); her grandchildren: Jay Jones (Dave Hickey), Stephanie Koons (Matt), Shaun Jones (Kristen Pedroso-Jones), Mark Moore (Cori Bane), Lauri Vent (Eric), Reed Jones, and Hunter Jones; her great-grandchildren: Henry, Jude, Madeline, Jaden, Noah, Lucia, Mason, Cruz, and Delayne; and her niece, Kathy Page Gravino of Annapolis, MD. Services will be private. In lieu of flowers, the family suggests donations made in Jane's memory to The Grace Science Foundation: P.O Box 114, Menlo Park, CA 94026, or www.gracescience.org, in honor of her great grandson, Mason Moore. Please sign the online guestbook located on this site.

Mrs. Eleanor "Jane" Jones, age 91 of Millsboro, DE, passed away in the early morning hours of July 21, 2019 at Atlantic Shores nursing home in Millsboro, Delaware. She was born in Colora, MD on April 29, 1928, the only child of the late Dr.... View Obituary & Service Information

The family of Eleanor Jane Jones created this Life Tributes page to make it easy to share your memories.

Send flowers to the Jones family.