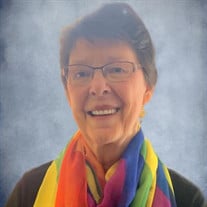 Elaine D. (Perry) Masterson, age 86 of Ocean View DE, passed away peacefully on Saturday May 1, 2021 in the supportive care of Delaware Hospice. Elaine was born in Philadelphia, PA in 1934, daughter of the late William and Irene (Hess) Perry. Elaine was a registered nurse, having graduated from Memorial Hospital School of Nursing in the Roxborough area of Philadelphia, PA in 1955. She was a dedicated caregiver for the entirety of her career in the Doylestown, PA area. Elaine settled in Doylestown with her loving husband of 44 years, William Masterson, Jr. and raised her family there. They retired to the Delaware Beaches in 2004. Elaine was an avid student of many classes offered by Osher Lifelong Learning Institute (OLLI) in Lewes, DE and loved singing in the CAMP Rehoboth Chorus for several years. She was a voracious reader, enjoyed dominoes with her neighbors, and spending time with her family. In addition to her parents, Elaine was preceded in death by her beloved husband, William Masterson, Jr. She is survived by her sons: Mark W. Masterson of Europe and Gregory J. Masterson of Guilford Vermont; her daughter, Nancy (Masterson) Kane and her husband Kevin Wharton of Ocean View, DE; her grandchildren: Amber (Wharton) Graham and her husband Cody Graham of Laurel, DE, Kevin Wharton, Jr of Brooksville, FL, James D. Kane of Ocean View, DE, and Jeremiah Hawk Masterson, Seth Orion Masterson, and Ruby Sky Masterson all of Guilford, VT; her sister Lynne Perry; and several cousins, nieces, and nephews. A celebration of Elaine’s life will be held on Saturday May 22nd at Nancy and Kevin’s home in Ocean View, welcoming friends and family any time between 12pm- 4pm. In lieu of flowers, the family suggests memorial contributions in Elaine’s memory to Delaware Hospice, 100 Patriots Way, Milford, DE 19963.

Elaine D. (Perry) Masterson, age 86 of Ocean View DE, passed away peacefully on Saturday May 1, 2021 in the supportive care of Delaware Hospice. Elaine was born in Philadelphia, PA in 1934, daughter of the late William and Irene (Hess) Perry.... View Obituary & Service Information

The family of Elaine D. Masterson created this Life Tributes page to make it easy to share your memories.

Send flowers to the Masterson family.