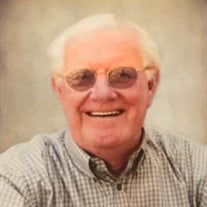 Edward J. Shockley Sr., age 93 of Lewes, DE, passed away in the early morning hours of October 14, 2021, from complications due to COVID. A true Lewes Local, Edward was born in 1928 in Lewes in a house on Front Street, where The Inn at Canal... View Obituary & Service Information

The family of Edward J. Shockley Sr. created this Life Tributes page to make it easy to share your memories.

Send flowers to the Shockley family.